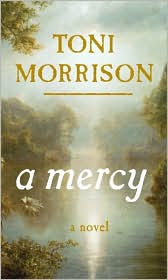 Newly released, A Mercy takes place in the 1680's - the early days of the slave trade in the Americas.

Jacob is a trader who takes a small slave girl- Florens - in partial payment for a debt. The mother of the child begs him to take the girl, not herself. It is this act that has consequences for all the lives that are intertwined with that of Florens'. Florens joins Jacob's wife Rebekka, Lina, a servant and Sorrow, an indentured young woman, at their hardscrabble farm. Scully and Willard are also hoping to buy their freedom. Florens yearns for the blacksmith, an African who has never been enslaved.

Life at this time in history is defined and described from the viewpoint of each of these characters. Each character is enslaved to something in this new world - an owner, religion, wealth, desire and memory. The most poignant voice is that of Floren's mother. The last chapter of the book belongs to her and it ends on a powerful note.

Toni Morrison has a gift with words. Although it is tempting to read straight through to the end, I always take the time to savour and enjoy the language she uses.

..."especially here where tobacco and slaves were married, each currency clutching it's partner's elbow".

Toni Morrison is an amazingly gifted writer, having won both a Nobel and Pulitzer Prize. If you haven't experienced her yet, I encourage you to pick up any of her books.
Posted by Luanne at 7:50 AM

I love Toni Morrison's work and have this one on my wish list.

I've really wanted this book since I heard about it coming out. I think that I'll wait for it on audio though.

This looked like it would be really good...it's on my wishlist..my LONG wishlist of books..not to mention I have a BIG TBR pile...and with Christmas around the corner, I will probably be getting even more!!So many books..so little time!

I love books that you have to slow down and savor it, like a good meal. This sounds lovely.

Luanne, I'll come back after I read this one. You're always one step ahead of me with these-lol. Glad you enjoyed it.

I've heard a lot of good things about Toni Morrison's writing... definitely on my list!

Found you commenting on Serena's blog -- you should totally join the declutter challenge! It's motivating, and you can do it however you please... I'm doing updates whenever I throw out a few things. I'm finding it helpful to myself to keep track of WHY I really don't need them.

I love Toni Morrison. Can't wait to read this one.

I love Toni Morrison too.

I just bought this book and I can't wait to start- great review!