** This giveaway is now closed. Check at the top of the sidebar for current giveaways!*** 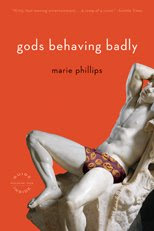 Here's your chance to win one of five (!) copies of Gods Behaving Badly by Marie Phillips courtesy of Hachette Books.

"Being a Greek god is not all it once was. Yes, the twelve gods of Olympus are alive and well in the twenty-first century, but they are crammed together in a London townhouse-and none too happy about it. And they've had to get day jobs: Artemis as a dog-walker, Apollo as a TV psychic, Aphrodite as a phone sex operator, Dionysus as a DJ. Even more disturbingly, their powers are waning, and even turning mortals into trees-a favorite pastime of Apollo's-is sapping their vital reserves of strength.Soon, what begins as a minor squabble between Aphrodite and Apollo escalates into an epic battle of wills. Two perplexed humans, Alice and Neil, who are caught in the crossfire, must fear not only for their own lives, but for the survival of humankind. Nothing less than a true act of heroism is needed-but can these two decidedly ordinary people replicate the feats of the mythical heroes and save the world?

You can join Miriam from Hachette Books for a Blog Talk Radio interview with Marie on December 1st at 1PM ET. If you have a question for Marie, please email it to miriam.parker@hbgusa.com. Then call into (646) 378-0040 on December 1st at 1PM. If you’d like to listen online or sign up for a reminder, visit here.

Simply comment to be entered. Giveaway closes on November 29 at midnight EST. Open to both Canada and the US, no po boxes please. Make sure I have a way to contact you and thanks for stopping by!

No need to enter me. I'm just dropping in to say thanks for the e-mail and I've got this posted at Win a Book for you.

Please enter me. Really want to read this one. Thanks! Sararush at hotmail dot com

Also blogged about it here:
smbooks.blogspot.com

This book sounds like so much fun, and I don't want to be left out! Thanks for the chance!
geebee.reads AT gmail DOT com

This books sounds awesome! Thanks for the chance to win!

I really want to read this one! I love stories about the ancient Greek gods in a modern setting lol.

Please enter me! Such a funny sounding book..in a good way, I mean. :)

This sounds like such a fun read. Thanks for the opportunity!

Don't enter me, there's a review copy on its way to me (I'm hoping). I just stopped by to say I added this to my sidebar.

I'm drawing another winner for this book tomorrow (and the fifth one next week) and I'll mention this giveaway for anyone who hasn't found it yet.

There's only one thing better than a new book, a free new book!

Please enter me! This seems like a terrific book!

Oooh, another chance to win this book! Enter me in the contest please and I am putting a link on my sidebar

No need to enter me in the giveaway. Just wanted to let you know I gave you an award / tagged you here.

I would really love to be entered to win this book.
Tamara
ptbaff@cogeco.ca

Sounds like a fun book! Thanks!!
pamelashockley at netscape dot net

I have missed every contest that has this book and go glad I came to you. I would love to win this. Aren't the Hatchett people great? Thanks!

I would love to win a copy of this book.

I'm glad to have another chance to win this book! Please enter me! Thanks!

I'd love to be in on this one -- the book sounds like so much fun.

Thanks for the contest!

Please enter me. I have heard such good things about this book.

Oooh! Please enter me in your contest. I've been wanting to read this book. Thanks! :-)

Please enter me, it looks like a great read. Thanks

I need to win this! Please include me also.

Please enter me for a chance to win!
joannelong74@gmail.com

Please enter me. Sounds like a fun book, that I would really enjoy reading.
ayancey(AT)dishmail(DOT)net

This sounds like such a fun book! Please enter me.
gr11781[at]gmail.com

I'd love to win a copy of this book!

I would love a chance to win this book. I have heard so much about it.
Thanks

I am intrigued by this book and have added it to my TBR list
JWIsley@aol.com

Please enter me in your contest

I'd love to read this book. Please enter me. Thanks a lot. mparke[at]shaw[dot]ca

I have always been interested in Mythology, and this book sounds like a fun twist on it. I'd love to read how the author portrays the behaviour of the twelve Greek Gods and Goddesses in modern day London !

Yes, I loved the Lightning Thief--this sounds like a similar concept for adults. please enter me to win!

Please enter me in the contest!

Please count me in! This is so interesting....I really can see myself locked away with this one!

Please enter me in the contest. I love free stuff.

A classics professor from college is telling all her former students that they absolutely must read this book, and I respect her opinion. Please enter me to win a copy!

I'd love to win a copy of this book!

I would love to win this one.
Thinking of all these temperamental Gods under one roof has to be a riot, besides being scary. Keeping my fingers crossed.
Happy Holiday everyone.

Thanks for offering this book in a giveaway!! I would love to read it and will even if I don't win.

Count me in! This sounds great! I loved Gaiman's American Gods.

This sounds so good. I've been hearing about it. I hope I win!