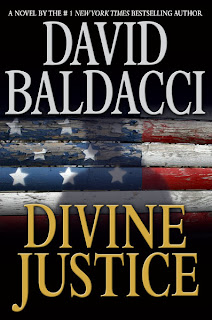 I have read many of David Baldacci's earlier novels, but haven't read him in awhile. Big mistake - I forgot how good he is!
Divine Justice is newly released from Hachette Books. It picks up the story of Oliver Stone, aka John Carr - one of the most deadly assasins the U.S. government ever produced. But when Carr wanted out and they killed his family, they made a terrible mistake. Stone retaliates and Macklin Hayes, a high ranking spy, is determined to find him and make him disappear for good. Stone ends up in the small mining town of Divine, Virgina hoping to lie low for awhile. But trouble seems to go hand in hand with Oliver Stone. All is not fine in Divine. Stone's sense of justice will not let him walk away. At the same time his friends from the Camel Club are trying to find him to help him.

As I had not read the Camel Club, The Collectors or Stone Cold, the other novels featuring these characters, I was a bit concerned that I wouldn't understand the plot in Divine Justice. But it wasn't a problem. A few pages in I was up to speed. Most of the action takes place in the Divine setting.

If you're looking for a fast paced, thrilling novel - this is it! The characters are larger than life and the action never stops. Good and evil are clearly defined and you'll find yourself rooting for John Carr.

Having just discovered the Camel Club, I'm curious if there will be another? I'd put it on my list. If you have enjoyed the Jack Reacher character by Lee Child, then this is a series you would enjoy. You can read the first chapter here.
Posted by Luanne at 12:05 PM

I liked this book a lot, too. It's definitely a page turner.

I have it on my TBR list. You make me want to go right home and read it!