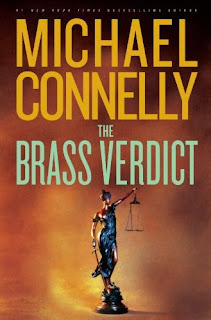 Mickey Haller first appeared in Connelly's 2005 novel The Lincoln Lawyer. I had followed the Harry Bosch detective series ( 13 up to now ) since 1993 and wasn't too sure about a 'new' character, but was happily proven wrong. Haller is back in The Brass Verdict. The best part? Harry Bosch is featured as well!

Defense lawyer Mickey Haller inherits a dead colleague's law practice and with it what could be his biggest case ever. His client, Walter Elliot, wants the case to proceed quickly, so Haller is playing catchup. But is his client holding something back? The dead colleague, Jerry Vincent, was murdered and Detective Harry Bosch is on the case. Can Vincent's murder and Elliot's case be tied together? Haller and Bosch may have to put their heads together for this one. The ending was fantastic setting up what I hope will be many more books where both characters are featured.

Connelly's writing skillfully captures both courtroom and police investigation scenes and dialogue. The legal aspect is never dry and the investigation side always keeps you guessing. His characters are believable and human. The personal lives and relationships of the main and supporting characters greatly enhance the whole storyline. It was interesting to see Harry Bosch through Haller's eyes. It was a bit of a different Bosch than I have become accustomed to. But that too is part of Connelly's skill - keeping us on our toes and never, never letting us become bored of his writing!

I always anticipate starting a new book by one of my favourite authors and try to stretch it out and 'make it last'. But yet again it didn't work - I burned through this new release in just over a day. Sigh.....another year till the next one.

Michael Connelly has a great website though - games, lists, trailers and much more. Hachette Books did a great Blog Talk Radio interview with Connelly - you can listen to it here. (My question is around the seventeen minute mark)

Highly recommended!
Posted by Luanne at 6:59 AM

I haven't read any of Michael Connelly's work, but I want to. I listened to the Blog Talk Radio show and found him fascinating.

I hate having to wait a year for the next book. It's hell. Never come across this author, will check out the website.

Hi Bookworm:
Your readers can also win "The Lincoln Lawyer" and "The Brass Verdict" for free -- two sets here:

I must say I'm a huge Connelly fan as well. Is there a more consistently good crime writer working today?