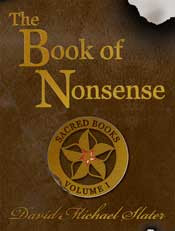 ~~Sacred Books - Volume One~~
Hmm, you're saying to yourself - that looks like a kid's book. And you'd be right - the first one I've reviewed.

The Book of Nonsense is newly released from CBAY Books /Blooming Tree Press and is the first in what is planned to be a five book series. David Michael Slater has written many children's books and has plans for quite a few more.

Daphna and her twin brother Dexter are about to turn thirteen. They live with their older father Milton, who is a book scout - hunting down old and valuable books. Daphna is very excited when a huge bookstore - the Antiquarian Book Centre (ABC) opens up. The funny thing is that it only stocks magic books.

When their father sells a very old book that seems to be filled with nonsense words to the ancient, blind man who runs the ABC, their lives take a decided turn for the strange. The red eyed giant boy who is the store assistant is after Dexter and their Dad is acting funny - he has promised that Daphna will help the old man. Daphna is frightened of the old man and rightly so. It all seems to centre around this mysterious book. Instead of fighting with each other Daphna and Dex will have to join forces to find out what is going on.
This tale has all the necessary elements to capture and hold a child's attention. A battle between good and evil, danger, mysteries and lots of questions to keep them guessing until the end.
The only thing I took exception to was the reference to God in regards to a mysterious book detailing a language called the First Tongue. This language "moves people's minds." One character tells how there is a myth "that God himself read from a book containing this language when he created the world." This is a fantasy book and I think it would have been just as effective to delete the God reference. I think this may offend some readers and their parents.

This book is listed as for ages 10+. I wondered about some of the words - unprecedented, formidable and incensed to name a few and wondered if they were age appropriate. As Slater is a middle school teacher I will assume he knows the level he's writing for.
The Book of Nonsense was a finalist for the Association of Booksellers for Children's Best Books 2008 and was a Cybil Award nominee.
Posted by Luanne at 6:52 AM

Given the following, I think it's safe to assume the line about God is not only not deletable, but central to the series:

2) An Amazon review claims a crazy Garden of Eden Adam is involved in a later book.

3) The author in an interview said there are no insignificant details (all five books are done), and that the series will not be for everyone as it gets increasingly challenging in both form and content.

For me, I can't wait. But it sounds like it won't be your cup of tea.

Thanks for your comments. I did enjoy the book and gave it a 4 star on amazon.com. My opinion and review are based solely on the one book I read, not on online 'places' or other reviews or claims.

Loved this book! And here's another one for you on the God stuff -- The publisher's slogan is "Publishing the Banned Books of Tomorrow."

I think they are counting on the God stuff upsetting enough people to get some more sales out of it.

That pretty much why I ignored that part of it in my review....I still thought it was a book with promise.