Who Lied and Said We Left the Garden of Eden 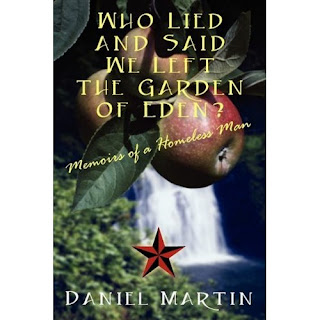 ~Memoirs of a Homeless Man~

I initially chose to read this book based on the subtitle. I am in awe of anyone who can turn their life around so radically and wanted to read about his journey.

I found the first chapter, Dreams and Visions, a little off-putting. One of them involves a dying young boy in a glass tank, but no one can see him to rescue him. Martin has described his childhood as "raised in a broken, abusive and religiously fanatic home." It is my opinion that earlier intervention may have spared Martin some of the hard life he has lived. But Daniel embraces his life as a learning and growing experience that has made him the man he is today. It was the promise of the introduction that kept me reading. "This book is mainly about how I changed my life."

Martin's spiral towards homelessness included dropping out of school, using any and all drugs including intravenous use, burglary, robberies and prostituting himself. Many stints in rehab did the job for a little while but none really 'took'.

Martin seems to be trying to reconcile his early religious teachings with his emerging vision of what shape his faith will take.

"I didn't know how to tell him that I was tired of trying to swallow so many doubts simply because others told me that it was the truth. It wasn't my truth and I couldn't take it any longer."

"I was tired of being so afraid where I felt we were heading, thanks to all of the crazy fanatic religions and greedy governments."

Stints of sobriety usually end with a fall back into old ways. But he perseveres in his search for peace within himself.

"I asked the Sacred Creator to show me truth here in heaven. What I learned is that we're all sacred, programmable and connected on a higher level of truth, love and tolerance." Daniel believes that heaven is here on earth and that "this is the will of our Greatest Mystery and Sacred Creator, that we should love this world and each other, as though we were all one."

I found the word programmable an odd choice, although I understand Daniel is using the word to indicate that we can all change our thinking.

Later chapters involving Martin's history of religion and fanatics fell a bit short for this reader. I was much more interested in his goal of promoting harmony and tolerance towards all, but was disturbed by the following qoute that I found personally a bit fanatical.

"Without a doubt, those of us who don't share that way of thinking will have to be mightier, wittier, better educated and more secretive if we are to win this war being raged over the minds of humanity and ultimately the safety of our mother planet."

I applaud Daniel Martin for finding his way out of drugs and homelessness. I admire his goal of a better life and a better world. He is married with two sons now and the owner of a plumbing contracting company.

This book was written "to do something in a creative way that might change, comfort and correct the hearts and minds of people." I would like to have perhaps heard how else he was giving back or helping those living the same life he crawled out of. He does credit many people for the help he received. Has he ever gone back and tried to help some of the people from his past?

I hope that he is still clean and happy and commend his efforts to make the world a better place to live.
Posted by Luanne at 7:25 AM

I read and reviewed this book. He did leave a comment in my post about my review. I am sure he struggles on a day to day bases to stay clean. It was really nice to read that he managed to turn his life around.

I'm not really into memoirs, but this sounds like an inspiring story. Great review!