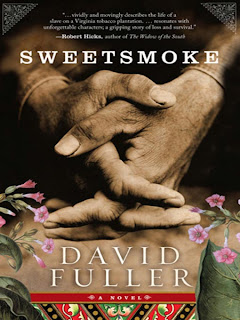 ~A Novel of the Civil War~

I've been anticipating reading David Fuller's first novel Sweetsmoke since it was released by Hyperion Books at the end of August.

I was captured by the cover image - work worn, lined, loosely clasped hands and I wondered the story behind them.

Fuller spent eight years researching this amazing novel. It tells the tale of Cassius, a slave and carpenter who lives on a tobacco plantation in Virginia. It is 1862 and the Civil War is in full swing. Interestingly Fuller found family connections to both sides of the War during his research.

After suffering a brutal punishment at the hands of his master Hoke Howard, Cassius is allowed to heal at the home of Emoline, a free black woman. Emoline secretly teaches Cassius to read and write. It is these secret lessons that ignite a need for knowledge, a want to know the world beyond the plantation.

"Cassius drove himself toward his journey in a step-by-step fashion, willing to risk everything, to know. To know."

This is a story with many threads, all of then engrossing. Life on the plantation, attitudes and the War are all portrayed with accuracy and detail, bringing to life this period in history. Fuller has also brought to life the lot of a slave, humanizing historical fact, in all it's shame. Although all the characters evoke strong emotions, it is the character of Cassius that kept me reading non stop. His journey towards knowledge and justice, combined with the mystery of Emoline's death is a gripping tale.

Sweetsmoke will be joining another similar book - "Rush Home Road" by Canadian Lori Lansens on my favourites list.

Many thanks to Mini Book Expo for the opportunity to read and review this fantastic book!

I loved this book Luanne. It was one of my favorites of the year.

Great Review Luanne. This is on the to buy pile. I love to cover too.

That is a great cover! I've such good things about this book, I guess I have to read it!