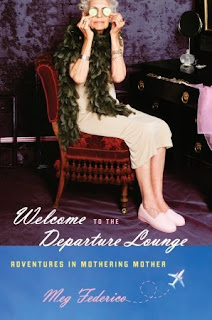 Meg Federico is a successful journalist, often writing humor pieces for the National Post. She lives in Nova Scotia, Canada and her mother lived in New Jersey. As her mother ages, Federico worries..

" Watching my mother for the past few years had been a lot like watching a blindfolded lady ride a unicycle on a tightrope. You can't take your eyes off her as she wobbles up there completely unaware that she's fifty feet above the ground because she can't see. And if you attempt to point out her peril, she thinks you're trying to ruin her career."

And then it happens - her mother does suffer a serious fall and is comatose in a Florida hospital. A hospital that is under court order to stay open, in a derelict neighbourhood with squalid conditions. Federico flies down, her brother arrives and they try to decide what is the best for their mother.

As they struggle with making decisions and overcoming seemingly unthinkable conditions, we are treated to flashbacks of her mother Addie's life and times.

Addie is married to her second husband Walter, who suffers from Alzheimer's. They both drink too much and neither has been declared incompetent. The solution reached by Meg and her stepsister Cathy (Walter's daughter) is to keep them looked after in their own home - which comes to be known as the Departure Lounge. Although the stories are at times humorous, many times I was saddened and appalled by the situations described. The family is very well off and they end up with eleven paid staff to look after these two confused, elderly people. Staff that ends up stealing, doesn't show up and half the time doesn't seem to care. Although Federico's story and explanation for the decision to keep them at home seems logical in the book, I still can't understand how all their money could not buy competent staffing. Or why the question of legal competency was not pursued more aggressively.

"Competency is complex and so hard to contest that several lawyers cautioned me away from it, advising that even if we won, we'd ruin our relationship with our mother, and things weren't quite bad enough to warrant it. But I'm telling you any judge who spent a weekend at the Departure Lounge would hand over guardianship of both of then to anyone who could walk and chew gum at the same time.

The situation between Walter and Addie had been going on for many years. He is a bully and his behaviour, temper and lust has not improved over the years.

"He certainly bullied my mother and threw tantrums and fits that made her life miserable."

There is no doubt that Federico loves her mother. She leaves her family in Nova Scotia repeatedly to be by her mother's side and loses her job.

"But Addie was my compass north; as long as she was around, I knew where I was, even if I was running in the opposite direction. How would I get my bearings without her?"

Elder care is a difficult subject - what is best for some may not be for others. The cost of care is prohibitive to some - something Federico acknowledges in the preface notes. Although I found the book hard to read at times, I truly appreciate Federico's candor in putting such a personal story to paper. It's a story all of us will face at some point, either for ourselves or a loved one. And it's all too easy to question something when you're not the one living it.

I experienced this last year with my mother and father-in-law. It was a tough six months, in and out of hospitals for my husband and I. I'm glad to see a book on the subject, but sure it is a difficult read.

I'll have to read this one. What a good title! It--along with your review--makes me think the book isn't squeamish about its topic.

I'm not sure I could handle this one at this point in my life, but I love the title and the cover.

I won this one but I haven't gotten around to reading it yet. I'm a little hesitant since I did live through this with my own grandmother but I still hope to enjoy the story.

Carol - it was difficult - one I had to pick up and put down regularly.

Shelley - I know - I'm going through this with my grandmother now.

Jeanne - Federico is very open and forthright. She did write the book ten years after her mother passed on, so it wasn't as raw and recent.

Ladytink - Let me know what you think when you get around to reading it!

This sounds like a really good book - but difficult (emotionally)to get through.