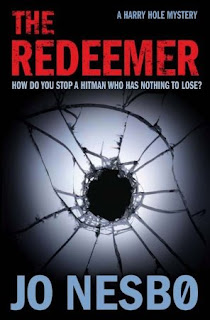 I love mysteries and detective novels - especially series, where you can really come to know the protagonist. The Redeemer was a great new find for me. It's the fourth book in the Harry Hole series by Norwegian Jo Nesbo. It's just been released this month in Canada by Random House.

Harry Hole is a highly effective detective in the Oslo police department. However he is a bit of a rebel - he has a problem with both alcohol and following orders. Because he gets results he is tolerated.

The Redeemer opens with a scene from 1991 at a Salvation Army retreat. A crime is committed but never reported. Fast forward to present day. An unnamed hit man is on his last job - he has decided to call it quits. When the hit man kills the wrong target and a snow storm prevents his escape from the country, Harry Hole isn't far behind. The hit man has limited resources in Norway and Harry is tightening the noose.

I found the first few chapters a bit confusing as the action changed rapidly from character to character, especially as the pronoun he is used for the hit man in the beginning. This cleared up fairly quickly though. Because it is so unique, I found the settings and the attitudes especially interesting. I thought it was very different to use a known religious organization as a main part of the plot. It does showcase the Army's good works, but also paints a portrait of an organization subject to the same issues as any other business. Oslo seems to have an inordinate amount of drug users and the tolerated sale of drugs in a specific area came as a surprise. (haven't yet discovered if that's fact or fiction)

I enjoyed the character of Harry - his flaws make him even more interesting. Other characters are well drawn as well, eliciting sympathy, anger, disgust and pity. The past of the hit man is told in flashbacks, changing our view of him. The ending provides an excellent twist, definitely turning in a direction I had not foreseen.

This was a first rate detective novel - I'll be looking for future Harry Hole novels.
Posted by Luanne at 7:15 AM

I recently read the first in the series, The Redbreast, and have the next two sitting on my TBR shelves.

What did you think Cathy?

I might have to see about finding the first one. Harry sounds like a great character and I agree, because of his flaws.