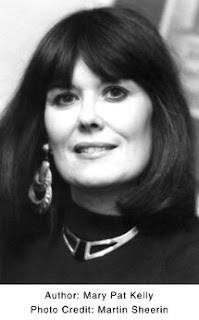 The bones of Galway Bay comes from my own family history, a story I discovered slowly over decades of research. In the beginning tracing my roots meant cranking through reels and reels of microfilm in a fruitless search. To access the U.S. Census records I needed the address where the Kelly’s first lived in Chicago, which I did not have.

I realized my father’s first cousin, Sister Mary Erigina, BVM might know. She did. Born Agnella Kelly in 1889, she had in fact lived with her great grandmother Honora Kelly. Agnella lived to be 107, her mind sharp and her interest keen. Now I found the right reel. Here were the names of Honora’s children, their ages, but nothing about where they came from in Ireland. 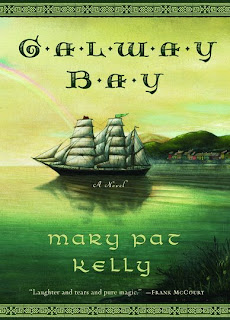 I followed the trail to Galway and discovered at last the record of the birth of Honora Keeley, September 15, 1822. And the place? A fishing village right on the shores of Galway Bay. The cottages were gone but the Bay was the same. I stood on the beach looking out, and could almost see my great-great-great-grandfather John Keeley setting out in a pucán, guided by a knowledge of winds, currents, and the patterns followed by the fish themselves that he’d learned from past generations. I went to the site of the fish market in Galway City and imagined Honora and her mother selling the catch under the Spanish Arch, bargaining and trading, handling money. Rare for women of that time. How did that shape their character?

I found that after Honora married Michael Kelly, they moved. Spidery handwriting in the church register recorded the births of each of their children, including my own great-grandfather, Patrick Kelly, and gave the name of their townland, a farming area in the hills above Galway Bay. I found the actual acres they had rented from the landlord and knelt down and touched this special piece of earth. Then I wondered how they’d coaxed a living from the stony ground. I knew the wheat and barley they raised went to pay an exorbitant rent. They relied on potatoes as their staple food. I now understood the songs that praised the wonder of the potato. The rich might have disdained the pratties, but the nutrients in these humble vegetables, unknown at the time, allowed my ancestors and their neighbors to thrive. Large healthy families were common, until the blight came and the inherent injustice of the system meant over one million died. And yet two million escaped, one reaching back for the next—the Kellys among them. Gone to Amerikay.

Yes, as I continued my research, American history came alive for me as well. The Civil War—brother against brother—a description I’d often heard. But when I found a descendant of the Mulloy family who had shared land with Michael Kelly in 1840, I began to really understand. Eugene Mulloy’s ancestors had lived in Nashville for generations. Had the sons of these Irish neighbors fought against each other in the terrible war?

I think all those who explore their family tree find that the experience changes them. History is not presidents and generals, battles and dates, it’s us! In these difficult times knowing what our ancestors survived is soul-sustaining. Think of it - wars, famine, genocide, the middle passage, slavery - and yet here we are. I felt inspired by my ancestors and profoundly grateful for the life their endurance gave me. I hope Galway Bay inspires you to celebrate your own heritage.


Be sure to visit Mary Pat Kelly's homepage. It has a wealth of information on her research for writing Galway Bay.


I adored this book!! You can read my review here. And enter the giveaway here for a copy of Galway Bay!

this is an inspiring guest post. I think I'm going to pop it into my blog post for today!

Wow.... what a great post! And you said it right.. Miriam did it again.. FABULOUS BOOK and TOUR!

This is such a fascinating story. What a privilege to get to interview her cousin like that.

I agree this is a fascinating story. I'm always interested in what inspires authors, and when it's real life, it always makes the book more special.