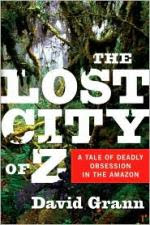 -- Subtitled: A Tale of Deadly Obsession in the Amazon --

Who hasn't watched the movies where an explorer or adventurer discovers a lost world or civilization? I personally am fascinated by the whole idea that there may still be some untouched or unfound something out there.

The Lost City of Z isn't fiction - it's an incredible true story. In 1925 famed explorer Percy Fawcett set out to find the fabled city of El Dorado or as he referred to it - The Lost City of Z. Dispatches were sent back documenting his journey for the first two years, but then he and his expedition vanished - no trace of them ever to be heard of again. Many others followed, looking for Fawcett or his golden city. None have ever found it.

David Grann, a staff writer for the New Yorker magazine, became enthralled with Fawcett's story as well. Grann discovers some of Fawcett's old journals that give him additional information on Fawcett's planned expedition. He decides to head to the Amazon himself and trace the explorer's route.

What follows is an absolutely riveting tale. The history of Fawcett and other adventurers bent on mapping and mastering the Amazon is utterly fascinating. The book alternates between Fawcett's time, drawing on newspapers, journals and letters to present a real picture of his time and Grann's own growing obsession and pilgrimage. I had to keep reminding myself that this was real - documented history. I honestly couldn't put it down. Does he discover what happened to Fawcett and his lost party - well I'll leave that for you to explore.

You can read the first chapter here. Oh and Brad Pitt is rumoured to be starring in a film version of The Lost City of Z coming out in 2010.
Posted by Luanne at 6:55 AM

Sounds like a good one. I hadn't heard of the story of Fawcett until I started reading reviews of this book.

I really enjoyed this book, too! I'll never be venturing into the Amazon, though, after reading it!

I'm looking forward to this one.

This book sounds amazing! Thanks for the review...I wanted to let you know that I gave you an award.

Oh cool! I've seen this around and just assumed it was fiction. Now I've heard that Indiana Jones was even inspired by Fawcett. Neat!

I gotta read this! I have an ARC somewhere or other. Gotta read it! :-) Great review!