Mutiny on the Bounty - John Boyne 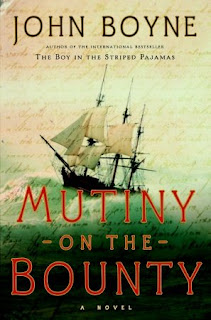 John Boyne - isn't he the one that wrote....? Yes Boyne is the author of the hugely successful historical fiction bestseller, The Boy in the Striped Pajamas.

Boyne turns his talents into a re-telling of the ill fated 1789 voyage of The Bounty to harvest breadfruit on what is now known as the island of Tahiti. The breadfruit was destined to feed slaves in Jamaica. After a long and difficult voyage, many men questioned William Bligh's leadership and a mutiny occurred. Bligh and 19 loyal men were turned out into a small launch and left to live or die. Bligh managed to guide them to land over the course of 48 days. Most of them did survive. Many books have been written, recounting this event.

Boyne's novel, although faithful to historical fact, is character driven. It is told from the viewpoint of 14 yr. old John Jacob Turnstile. Turnstile is given a choice - serve his gaol sentence for thievery or sign on as the captain's servant boy on the Bounty. The ship is his choice. Having never sailed before, we are treated to seeing the vessel, the traditions, the crew, Bligh himself and the fate of The Bounty's historic voyage through the curious eyes of "Turnip", as he is known to the crew. Turnstile is a wonderfully engaging character. His dialogue is witty, sharp and humorous. He is wise beyond his years in certain ways and yet naive in other matters. His documentation of the ship's crew, their personalities and what may have led to the mutiny are a fresh look at a known story. Knowing the history of the Bounty did in no way detract from the reading of Boyne's book. Boyne is a consummate story teller and The Mutiny on the Bounty is a heck of a tale. Highly recommended.

I will definitely be adding this one to my TBR. I loved Boy in the Striped Pajamas for many reasons, one being his sparse prose style. Is this the same?

Tricia - I must admit I have not read The Boy in the Striped Pajamas - this is my first read of Boyne ( but won't be my last)
I don't think I would called the prose sparse in Mutiny. It is from Turnstile's point of view and his thoughts, views and dialogue comprise pretty much the entire novel. But definitley worth adding to yoru TBR pile.

I have never read this Luanne. Do you think this would be a good read to share with my 14-year-old son?

I had wondered about this book when I'd seen it. Sounds like a good tale. I was really drawn to the cover.

I know I've seen this movie, but can't remember if I've ever read the book.

Kelly - the protagonist is 14 yrs old and it is a good adventure tale. However there are some sexual themes - the women of Tahiti were very friendly with the men of the Bounty. Also Turnstile was brought up in a Fagin like home, taught to pickpocket and some of the boys were abused by other men. Hopefully this gives you some extra insight on whether to read it with him or not. Let me know what you end up doing...

This definitely looks like one to check out, thanks for the review. I know nothing about the Bounty...

I really liked this book too. I'm posting my review of it tomorrow - I hope you don't mind that I'm linking to your review at the end of mine.