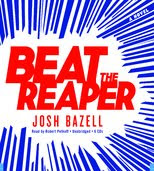 I listened to Josh Bazell's debut novel Beat the Reaper in audio format.

Peter Brown is an intern at one of the worst hospitals in Manhattan. He's there because he's in the witness protection program, in hiding from the Mafia. Hiding because he was a hired killer and turned informant. When he goes to see a new patient, it happens to be someone from his past, who unfortunately recognizes him. And calls in reinforcements. Peter's day goes from bad to worse. In backflashes we learn how Pietro "Bearclaw" Brnwa came to be Dr. Peter Brown.

This is a raw, gritty tale, filled with laser quick dialogue and non stop action. The reader, Robert Petkoff, has the perfect voice to bring this book to life. His voice has a young, abrasive edge that just adds to the tone of the novel. Music announces the beginning and end of every disc and sound effects are used to enhance the action and drama Now as a warning, some listeners may be offended by the amount of violence, drugs and sexual language used.

What's interesting is that Bazell is currently a medical resident himself. Some of the hospital personnel scenes were quite graphic and I really hope he was taking literary license! The book has it's own website that you can check out here.

For a chance to win your own audio book copy of Beat the Reaper, courtesy of the Hachette Book Group, enter my giveaway here!
Posted by Luanne at 8:35 AM

I read the book and loved it. Not sure I would enjoy the audio as much because I literally read the last scene peeking between my fingers.

I know! I was listening while driving and had the urge to cover my ears a little bit! Definitely an action ending!

I've heard a lot of good things about this book. Now I'm curious about the hospital scenes, and I might be sorry about that because I have a weak stomach!

I have this but I haven't started it yet. I think I'll really like it though!