Above the Law - Tim Green 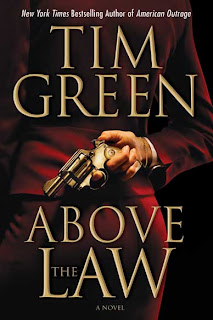 Lawyer Casey Jordan was first introduced in The Letter of the Law. She has left the high powered firm she was with and has opened a legal aid clinic.

Senator Chase has a tragic hunting accident on his property, killing one of his Mexican workers. But when a woman comes to Casey's clinic and says that her sister in law's husband was murdered by the Senator, she reluctantly agrees to look into it, not putting much stock in the idea of a murder. But when she is thwarted at every turn and discovers first hand how the Senator controls the law in his corner of Texas, she becomes a believer. Aided by her investigator Jose, they discover that this murder is a cover up for something far bigger.

Tim Green has created another solid legal thriller in Above the Law. Although some of it is predictable - the sexual tension between Casey and Jose, the bucking against the odds, tenacious, good looking female lawyer and the 'untouchable' bad guys, it also deals with some very relevant topics. Namely the abuse and plight of illegal immigrants. Green has woven together this element with non stop action and produced a very entertaining read.

You can read the first chapter here!

Green himself has had an interesting journey - he played pro football for eight years, was a sports commentator and also earned his law degree.
Posted by Luanne at 9:23 AM

I enjoyed this book too. I haven't read The Letter of the Law, but I'd like to.

Letter of the Law was an excellent thriller - kept me on the edge of my seat with my heart thumping. Great review, Luanne, I really want to read this new one.

This book really sounds good, so I guess it's going on my TBR list :)