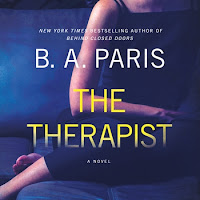 New York Times bestselling author B.A. Paris has just released her latest book, The Therapist. If you enjoy psychological suspense, this one is a must read/listen!
Alice and Leo have just moved in together in a small gated community, affectionally known as The Circle. It's only after they're in the house, that Alice learns of a disturbing crime that occurred two years ago in her new home. Alice becomes consumed with the crime and begins asking her new neighbours about the past. But, they're not interested in sharing with her. After all, it's done and gone - right?
The Therapist has the feel of a 'locked room' mystery, which I absolutely love. There's a set number of houses in The Circle, and we come to know the residents, their temperaments and yes, some of their pasts as details are slowly but surely revealed. The 'new house' sheen is wearing off for Alice and Leo and their relationship begins to develop cracks.....
Alice is an interesting lead. I liked her, but found her intrusive as she continues to pry into the past. (I am indeed being purposely obtuse about the crime so as not to provide spoilers.) She continues to push and I'm not sure I wouldn't have shut the door in her face. The residents of The Circle are a varied bunch and the whodunit could have been any one of them. I suspected every one of them at one point or another. As the book progressed, I had my suspicions, but I was happily only partly right. Lies, obfuscations, Alice's imaginings (or are they?) all serve to ramp up the tension.
I chose to listen to The Therapist. The Therapist was a great book, but even better in audio IMO. The reader was Olivia Dowd and her performance was wonderful. She has a lovely accent that's easy to understand. Her voice is very pleasant to listen to and has a rich undertone. The voice suited the character I had mentally imagined. A lot of the book is conversations and Dowd makes it feel like there are different personas there. She captures the emotions and tensions in the plot easily with her interpretation. An excellent performance. There's a limited male role performed by Thomas Judd - his voice was perfect for the character and atmosphere. I've said it before and I'll say it again - I become much more immersed in a story when I listen to it. Another excellent book from Paris!
Posted by Luanne at 8:00 AM

Thanks for stopping by Mystica - I hope you get a chance to read it.

What I loved about this book was that anyone could have been the culprit. I didn't figure it out until the very end.

Me too Book of Secrets!

I'll have to try the audio!