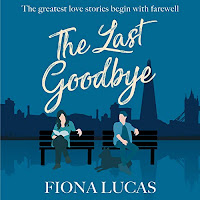 The Last Goodbye is Fiona Lucas's newest novel. She pens "heart-warming love stories and feel-good women’s fiction" and this latest is both.
Anna's husband Spencer died three years ago. She is still struggling with the loss and can't seem to move on with her life. On a lonely New Year's Eve, she calls his cellphone number to hear his voice again on the message. But this time, it's not Spencer's voice she hears - it's someone else named Brody, who has been assigned the number. And he's very much alive.
I thought this was such a great premise - hearing a loved one's voice one more time is something everyone can relate to I think. There are lots of ways this plot could progress...
I liked Anna as a lead character. She's kind, thoughtful and is self aware. Brody is a wounded soul as well, keeping himself to himself. But he's happy to talk to Anna. And talk they do - their conversations become more and more personal, despite never having met. It's is Anna's situation that takes the lead - it's quite awhile before we're privy to the reasons as to why Brody has isolated himself from family and friends. There are a number of strong supporting character as well. Anna's best friend Gabi is quite outspoken and a little loud and pushy, but she does care for Anna. Anna's mother in law Gayle's behavior borders on cruelty. But then again, everyone grieves differently. And that's what Lucas writes - how grief is handled from different viewpoints. And of course the question - can you ever love again after such a loss?
There's a lot of two steps forward, one step back as Anna begins to make progress. The friendship with Brody is a large part of her progress. Can it ever be more? I'm not telling!
I chose to listen to The Last Goodbye. The reader was Antonia Beamish. She had a lovely tone to her voice, very pleasant to listen to. She speaks clearly and is easy to understand. She has lots of movement in her voice, capturing the emotions of the character and the action of the book. She does provide different voices for the characters, including the male players. But...sorry, yes I have a but. I could not stand the voice for Gabi - it just grated on me. It is mentioned that she is Brazilian and Beamish has provided a unique voice for her. But for me, she was too loud, I couldn't stand her dropped letters on every word that ended with ing and shortened, staccato words or on the flipside - long drawn out single words. She just didn't ring true with me. So, I ended up fast forwarding through her appearances. Other than that, a good performance. Hear for yourself - listen to an excerpt of The Last Goodbye.
The Last Goodbye was a thoughtful, slow burning exploration of grief and loss and the search for self - and love.
Posted by Luanne at 10:33 AM

This seems like such a universally relatable premise. Great review!

Thanks Ethan. Yes, who wouldn't want one more call from a loved one....

I have read such a similar book but the title isn't coming to me at the moment. Huge fan of this trope.

It's lovely get away, escapist reading isn't it Joy?!

Thank you for a lovely review.