The One Hundred Years of Lenni and Margot - Marianne Cronin 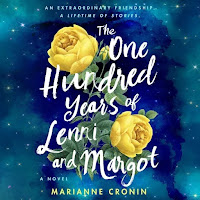 Although my favorite genres are mysteries and suspense, I like to take a break and mix things up with something different.
I loved the colors, flowers and stars on the cover of Marianne Cronin's debut novel, The One Hundred Years of Lenni and Margot.
Seventeen year old Lenni and eighty three year old Margot are both living on borrowed time. Lenni is on the terminal ward and Margot is in for heart surgery at a Scottish hospital. Their paths cross in an arts and crafts class at the hospital and despite their difference in age, they hit it off.
I liked the story telling method that Cronin chose for her novel. Lenni and Margot decide to share their lives, told in stories and paintings - all in a run up to their 'one hundredth birthday' - a combination of their ages. The point of view is back and forth between the two, both past and present.
Lenni is the first character we meet and I have to say that after the first few chapters, I wasn't quite sure that I would enjoy this book. I found Lenni's actions, inner dialogue and outward questions to be that of a much younger person. She makes friends with the hospital pastor (who was a great, kind patient character) and asks questions such as 'why can't he wear his dress (vestments) to garden in'. I'm not sure if Cronin was aiming for precocious, but I found her to be a bit annoying. And I felt bad about it, as we know she is dying. My opinion did warm up as the book progressed and we come to know her past, her hopes and fears more intimately.
But.....I have to say that I loved Margot! Perhaps because I am closer in age to her and can relate easier to her. Her life story is fascinating as we watch her grow, change and embrace what life throws at her. That's not to say there isn't heartbreak in her life, but she seems to makes it a part of herself and moves on. I couldn't wait for her next chapter.
There are a number of 'good' characters that are positive and populate Lenni's world, but there's also a'Nurse Ratched'. I had a difficult time believing this awful character's actions and attitude.
The One Hundred Years of Lenni and Margot gives us two different perspectives on life. One barely begun and one reaching towards the end. Each has heart warming and heart breaking bits. Cronin's tale will leave you wondering what your own story might be.....
I chose to listen to The One Hundred Years of Lenni and Margot. I often feel closer to and more engaged with a book when I listen. The readers were Sheila Reid and Rebecca Benson. I thought I recognized Reid's voice from a television show as I listened and was proven right once I went looking. She's got a lovely gravelly tone to her voice that connotes an older character, along with a Scottish accent. She's got a measured pace of speaking that added to the mental image I had created for Margot. She easily makes the character come alive, interpreting and presenting Cronin's work well. The voice that Benson provided for Lenni sounds young and suits the character. Her voice is clear and easy to understand. What I wasn't as keen on on was the speed of her narrating and the longish pauses. She also did the voice for Father Arthur and it felt warm, suiting the character. Listen to an excerpt of The One Hundred Years of Lenni and Margot.
Film rights have already been sold.
Posted by Luanne at 8:00 AM

Great review! I love stories like this. I may be adding it to my list to read.

Thanks for reading Vicki!