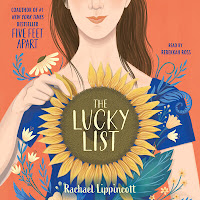 Rachael Lippincott is the co-author of Five Feet Apart, which I really enjoyed. She's just released her solo novel, The Lucky List.
Emily and her mother were really close. Were, because three years ago her mom died - and nothing has felt right since. As Emily and her dad begin to pack up things for an imminent move, Emily finds a bucket list her mother made back in her high school days. And suddenly she knows - she has to do the same list....
Lippincott takes the reader back to the final days of high school. And all the angst, drama, friendships, relationships and the question of what's next. But Lippincott puts more on Emily's plate - unresolved grief over her mother's death and questioning her sexuality.
Emily is a great protagonist and I thought she was well drawn. Her actions, reactions, internal turmoil and more, are realistic and believable. Blake seems a little too perfect at first, but she seems to know herself more and has confidence in who she is. Lippincott has written the burgeoning relationship in a measured, thoughtful manner. I was a bit skeptical of the relationship Emily had with her dad. He makes a decision without consulting Emily that I thought was a bit of a reach. But, we all grieve in out own way. The supporting cast is filled in with old family friends and high school friends, each with roles to play.
Well done. I chose to listen to The Lucky List. The reader was Rebekkah Ross. I've listened to other books she's narrated and I really like her voice. Its pleasant to listen to, clear, and easy to understand. Her voice is believable as a teenage girl. Her narration is very expressive and has movement, easily capturing the emotion of the book. Hear for yourself - listen to an excerpt of The Lucky List.
Posted by Luanne at 8:00 AM