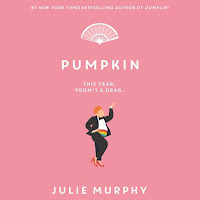 Hands up if you adored Julie Murphy's previous two books - Dumplin' and Puddin'! The latest in this series is Pumpkin - and it was another brilliant listen!
"Waylon Russell Brewer is a fat, openly gay boy stuck in the small West Texas town of Clover City. His plan is to bide his time until he can graduate, move to Austin with his twin sister, Clementine, and finally go Full Waylon so that he can live his Julie-the-hills-are-alive-with-the-sound-of-music-Andrews truth." (And the nickname Pumpkin is thanks to his red hair and his Grammy.)
I couldn't wait to meet Waylon! I loved him from the get go - his spunky attitude, his dreams, his confidence (although it definitely wavers in private) and his determination to live his life the way he wants to. New Clover City students are part of the supporting cast, all just as well drawn. And I was thrilled to see Willowdean and Millie again.
Pumpkin takes place in the last months of the senior year. Plans for what's next with his twin sister have gone awry. Being nominated for Prom Queen was a supposed to be a cruel joke played on Waylon - but he embraces it - and I'll leave you there.....
Murphy excels at depicting the inner thoughts, dialogue, emotions and actions of her characters. They're so believable and I am sure everyone can relate to them in one way or another. (I'd be happy to be part of Waylon's group of friends.) The budding will-it, won't it, romance is so well written as well.
Julie Murphy has done it again. Pumpkin is a feel-good, cheer for the underdog, wish for happiness, heartwarming listen. There are some difficult situations, such as bullying and shaming, which unfortunately are realistic. Grrr!
I am so glad I chose to listen to Pumpkin. I always feel more immersed in a story when I listen. It's much of that depends on the narrator. And actor Chad Burris was the absolute perfect choice. His voice immediately started building an image and sense of who Pumpkin was. His voice is clear, easy to understand he enunciates well. His voice has such movement. But it's the sass in his voice and the tones and emotions he imbues his performance with that made this a stand out performance for me. The book really came alive with his interpretation of Murphy's work.  Hear for yourself - listen to an excerpt of Pumpkin.
Pumpkin could be listened to as a stand alone, but do yourself a favor and listen to the first two as well. I'm quite sad that this is the end of these characters. Julie Murphy - "It’s hard to say goodbye. I’m ready to move on creatively, but I don’t know if it’s a door I can ever fully close. I’ll always have a special place in my heart for Clover City." But I'm still going to have my fingers crossed for the possibility of more from Clover City.
Posted by Luanne at 8:00 AM