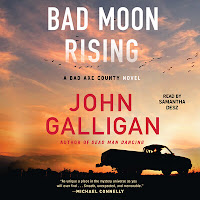 I stumbled across the first book a couple of years back and was immediately hooked. Why? Well, the lead character has much to do with that. Sheriff Kick is a former Wisconsin Dairy Queen turned Sheriff. But don't let that fool you. Kick is seriously bad***. She doesn't back down from anyone or anything. She's had to fight the local council, the local thugs, the good ol' boy network and much more. She's also a mom with three kids and a husband - and a lot of folks think her personal life is fair game too.
She's up for re-election this year and the other guy running is playing down and dirty. Heidi will deal with that when she can, but there's other pressing matters first. Homeless men are going missing - and the last one found was buried alive. Veteran and ex newspaper editor Leroy Fanta has an idea of who might be the perp.
So, a great protagonist and an intriguing plot. Galligan has a scary mind - the who and the why behind the missing men is truly twisted. Although there are some truths behind the madness. And that crazy is stealing past the confines of the hollow to the light of day.
And last, but certainly not least is the setting. Bad Axe County. I doubt I would stop in Bad Axe County - it just says 'keep on driving' to me. In Bad Moon Rising, the county is in the midst of a heat wave with temperatures breaking 100 degrees F. The heat is relentless - almost enough to drive you mad.
There's lots of action in Galligan's books and I was engaged from first chapter to last. I'll be eagerly awaiting the fourth book and more of Sheriff Kick.
I chose to listen to Bad Moon Rising. I've listened to to the first two as well. I'm happy that Simon and Schuster has continued with the original reader - Samantha Desz.  Her voice is perfect for this character and matches the mental image I've created for Heidi. Desz's voice has a nice gravelly tone, is easy to understand and easy on the ears. She rarely raises her voice which is absolutely right for this character. The calm way of speaking belies her determination. It's well paced, never rushing and perfectly modulated. The voices employed for other characters are really good as well. Hear for yourself - listen to an excerpt of Bad Moon Rising.
(Gentle readers, this series is quite gritty and may not be the read/listen for you.)
Posted by Luanne at 9:00 AM

Sheriff Kick sound like my kind of sheriff! From her family life, to her past and the old boy network she has to battle — I can see why you like this series.