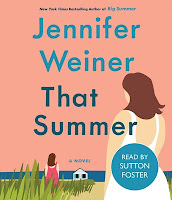 I've enjoyed Jennifer Weiner's writing from her first book, Good in Bed, through to her current release, That Summer.
Now, that cover shot does promise a 'beach read'. And indeed a lot of the book is set in Cape Cod, with much love for the the beach/sun/water and more. But there's a deeper story found in That Summer.
Daisy keeps receiving emails for a woman whose e-address is almost identical. They converse and Daisy and Diana decide to meet up. They hit it off and a new friendship is formed. But Diana seems to have a hidden agenda....
The point of view switches from Daisy to Diana, as well as Daisy's teen daughter Beatrice. The listener slowly learns about the past of each of the leads - and how and why their lives have crossed.
Both women are engaging characters and I connected and empathized with both of them, but felt more drawn to Diane. She's a stronger character, while Daisy seems to let life take direction from her husband. But, I have to say that I really loved Beatrice, whos seems to have her head on straight and her sense of self firmly defined by fifteen. And on the other side of the coin is Daisy's husband Hal. Seriously unlikable - which is being kind.
I don't want to provide spoilers, so I'm just going to say that Weiner always weaves relevant social issues through her books. Fair warning to gentle listeners - this one is pretty heavy. Weiner's handling of that issue has been written with thoughtfulness and care while still spelling out the aftermath. There's lots of food for thought in this novel. I must admit, I did have a hard time with the ending - it's not what I would have liked to see, and I questioned if it truly would happen outside of the pages of a book. The ending would make for a great book club discussion.
I chose to listen to That Summer. And I have to say that this book had a bigger impact on me in audio format than print. The narrator is always plays a big part in that. Sutton Foster was the reader and she was a great choice. I've listened to her before and have enjoyed her reading. She has a very pleasant voice that suited Daisy perfectly. She changes it up for Diana, so you know who is speaking. There's a rich undertone to Foster's voice that is quite pleasant to listen to. She enunciates well and her pace of speaking is just right. She infuses feeling into Weiner's words and easily transmits the many emotions of the plot. Another great performance for Foster. Hear for yourself - listen to an audio excerpt of That Summer.
Posted by Luanne at 8:00 AM

I'm having a hard time accepting that we are already approaching Summer, but beach reads like this one help to ease that transition a bit!

It's a good read Joyous - but be prepared for some heavy themes as well.