How Lucky - Will Leitch 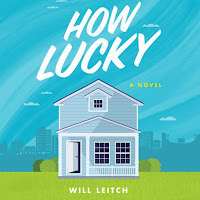 I really like the simple unassuming cover of Will Leitch's new novel How Lucky. But the real reason I picked it up was Stephen King's blurb - "A fantastic novel. . . . You are going to like this a lot." And yes, I really, really did!
Daniel lives in Athens, Georgia, works for an airline answering customer issues online, goes to football games on the weekend and hangs out with his best friend Travis. One morning while out on his porch, he sees what he thinks is a kidnapping of a student who walks by daily. But did he? She seemed to get in willingly. But then Ai-Chin is reported as missing. Daniel attempts to let the police know about what he's seen, but....
And a lot of that but has to do with the fact that Daniel has a degenerative physical disability - SMA - Spinal Muscular Atrophy. The police officer sent to talk to him, can't seem to see beyond the wheelchair. Daniel's concerns and information are blithely explained and written off.
What a fabulous lead character! I loved Daniel's voice, his sense of humor and his refusal to define himself with his condition. The supporting cast is just as great - everyone needs friends like Travis and Marjani.
I learned so much about SMA through Daniel. The hard, cold facts but also the human emotions, attitudes, strengths and joys that Daniel embodies. He considers himself to be lucky. You'll need to have a tissue handy in more than one chapter. And maybe see your own life through his lens.
Back to Ai-Chin - she's still missing and Daniel decides to investigate online. And I'm going to leave it there.....
I chose to listen to How Lucky. With such an engaging lead character, the reader needed to be just right. I'm happy to say that Graham Halstead was the perfect choice. His voice is clear and both easy and pleasant to listen to. His voice matched the mental image I had created for Daniel. There's lots of movement in his voice, capturing Daniel's thoughts, emotions and interactions and bringing them to life. Halstead captures the overall tone of the book easily. I've said it before and I'll say it again - I find myself more drawn into a tale by listening. And that is definitely the case with How Lucky. Hear for yourself - listen to an audio excerpt of How Lucky.
Posted by Luanne at 8:00 AM

I hate it when people do not see beyond the disability and think the person is an idiot or speak loudly as if they cannot understand. Even today, this exists.

I love that this one shines a light on people with accessibility needs. And if Stephen King says a book is good, it usually is!

Hey Ethan - I've been seeing a number of blurbs from King - and yes, they have so far all ended up being great reads for me.