Our Woman in Moscow - Beatriz Williams 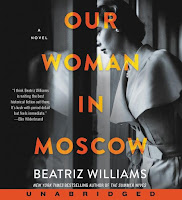 Over the last year, I've been really enjoying historical fiction. Beatriz Williams is a New York Times bestselling historical fiction author. Her latest (and a first for me) novel is Our Woman in Moscow.
Our Woman in Moscow has its roots in WWII, but Williams takes us past that and sets most of the novel during the Cold War years in the early 1950's.
The novel is told from two sister's alternating points of view - Iris and Ruth. Once close as children, but as adults they haven't seen each other for over a decade. No one has seen Iris, her diplomat husband Sasha and their children for four years. And then a postcard arrives for Ruth - and its from Iris. And Ruth thinks she knows where Iris might be - and that she must go to her.
Williams has created some great characters. Sassy, in your face Ruth -I loved her dialogue and attitude. Iris is quieter, but still waters run deep. The book explores the relationship between the sisters, as well as their romantic entanglements. This personal line is paired along with the setting, atmosphere, machinations and politics of the Cold War.
The tension builds with each new chapter in the present time frame, but also in the 'past' chapters as the listener learns how this situation, this point in time, came to be. I did have an inkling as to what might transpire in the final chapters, but it in no way detracted from my enjoyment of the book.
It was only on listening to the author's notes at the end of the book, that I learned Williams' story took inspiration from The Cambridge Spy Ring. Fascinating!
I chose to listen to Our Woman in Moscow. The readers were Nicola Barber (a new to me narrator) and a perennial favorite - Cassandra Campbell. Each reader employed voices that suited the character they were reading. Barber's voice was quieter, matching Iris's personality. Campbell perfectly personified the larger personality of Ruth. Each reader's manner of speaking was clear, easy to understand and pleasant to listen to. The British accents were authentic. Each reader also provided Russian accents that were believable. I was quite happy with having two narrators. It made for distinctly knowing who was speaking/on center stage. I thought both readers captured and portrayed Williams' book perfectly. Hear for yourself - listen to an excerpt of Our Woman in Moscow.
Posted by Luanne at 8:00 AM

This sounds excellent and I love the use of more than one narrator to keep the characters separate and distinct. I've noticed this being done more and more. Thanks for sharing.

I thought it was excellent Diane. I too am a fan of multiple readers. I'm listening to one right now - multiple characters and just the one reader. I like the story, but dislike one character simply because I can't stand the voice being used.

An author I like very much though not much luck tracking the latest books.

Double drat Mystica! I checked on Netgalley and not there. Library?

I've not read/listened to her before Many Thoughts - but will def read her again!