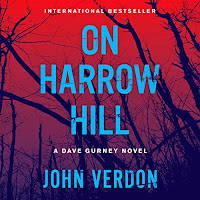 John Verdon is the author of the Dave Gurney series. On Harrow Hill is the seventh book in the series. What's it about? Here's a description from Random House Audio - my thoughts follow.

"When an old colleague comes to him for help solving the mysterious death of his town's most prominent resident, retired NYPD detective Dave Gurney must use all of his analytical skills to hunt a murderer who just might be killing from beyond the grave.

The idyllic community of Larchfield is rocked to its core when Angus Russell, its wealthiest and most powerful citizen, is found dead in his mansion on Harrow Hill. A preliminary analysis of DNA gathered at the crime scene points to the guilt of local bad boy Billy Tate, whose hatred for the victim was well known. Except that Tate fell from the roof of a local church and was declared dead by the medical examiner the day before Russell was killed. When police rush to the mortuary, they discover Tate's coffin has been broken open from the inside and the body is gone.

A series of murders soon follows as Larchfield loses its collective mind. Gun sales explode. Conspiracy theories and religious fundamentalism spread. The once-peaceful town becomes a magnet for sensation seekers, self-proclaimed zombie hunters, TV producers eager for ratings, and apocalyptic preachers rallying the faithful for the end of days. His quiet retirement shattered, ex-NYPD detective Dave Gurney finds himself not only facing down a murderer, but struggling to restore order to the town rapidly spiraling out of control.

I've been a fan of John Verdon right from the first book 2010. I've enjoyed every one since.

Verdon crafts some great plot lines - and this one is a doozy with quite a few red herrings and garden paths - which I happily travelled. I really enjoy Gurney's deductive processes. His calm, cool, intuitive manner belies an intense curiosity and drive to solve cases.

Verdon has developed his characters over the course of seven books. We know what kind of detective Gurney is, but we also get to see beneath his controlled exterior.  Gurney's enigmatic wife Madeleine continually intrigues me. Her love of nature, colour and life are in stark contrast to Gurney's pursuit of killers. She rarely gets upset and seems to know the right thing to say at the right time.

This is the first time I've listened to one of Verdon's books. I discovered that one of my favorite readers - Scott Brick was the narrator. He has the most versatile, expressive voice. And after so many years of visualizing Dave Gurney, he has the right voice as well. Brick conveys the tone and tenor of Verdon's plot easily, drawing the listener deeper into the story. His voice is easy on the ears, clear and the pace of speaking is just right. Here for yourself - listen to an audio excerpt of On Harrow Hill.

I'm looking forward to the next in this series - Gurney might be retired, but he loves a good mystery - as do I!