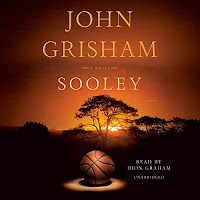 John Grisham writes legal thrillers. But he also writes stand alone sports novels that are just as wonderful. The latest is the newly released Sooley.
Samuel's home in is South Sudan, a war torn country beset with violence. Samuel dreams of someday playing basketball in the US - and bringing his family with him. And through a series of events...he makes it to the US....
Oh, I love a good underdog story! Sooley's story is one of those. The listener will fall in love with him and have their fingers crossed that he fulfills his dreams. Grisham has done a fantastic job building his characters. The supporting cast of coaches, teammates and supporters drew me in just as much as Sooley did. There are some real life people woven into the story as well.
Sooley is told in alternating settings - with Sooley in the US and then cutting to the Rhino Refugee Camp in Uganda where Sooley's family is.
I thought the plot was fantastic, believable and possible. I was caught off guard with an unpredictable development that I must admit, made me a little angry. But it was indeed a believable turn. Grisham hits many social issues in this book.
All in all - I loved it!
I chose to listen to Sooley. The narrator was Dion Graham and he was the perfect choice. His voice is rich and full and really pleasant to listen to. He provided different voices for every character - they suited the mental images I had of the characters and it was easy to discern who was speaking. The voice for Sooley was so very good. Graham easily interprets Grisham's book with his expressive voice. And extra points for  'calling' the basketball games. It sounded just like we were in the stadium. I've said it before and I'll say it again - listening immerses me in a book and I feel like I'm part of the story. Even more so in this case. Hear for yourself - listen to an excerpt of Sooley.
Posted by Luanne at 8:00 AM

Your enthusiasm for this book is apparent. Glad you enjoyed it so much. Not a book I'd usually read, but I like that he goes for his dream during such dire circumstances.

I'm normally not a sports reader Vicki, but I had enjoyed one of Grisham's previous stand alone books (Calico Joe) and enjoyed it, so I thought I might enjoy Sooley.