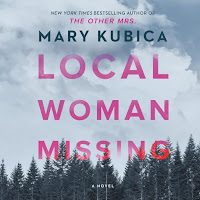 Local Woman Missing is Mary Kubica's latest novel - and a first read/listen of this author for me. It won't be the last!

"Shelby Tebow is the first to go missing. Not long after, Meredith Dickey and her six-year-old daughter, Delilah, vanish just blocks away from where Shelby was last seen, striking fear into their once-peaceful community. Now, eleven years later, Delilah shockingly returns. Everyone wants to know what happened to her, but no one is prepared for what they'll find…"

Kubica opens the book with a nail biting scene featuring Delilah that guaranteed I would be staying up late listening to just one more chapter - and maybe another, and another. Kubica employs one of my favorite story telling methods - the back and forth of a past and present timeline. The tension builds as we start to piece together what happened eleven years ago with what has/is coming to light in the present.

And - multiple points of view as well - another favorite device! I love knowing more than the individual characters and thought I had things figured out. Umm - no. Kubica fooled me many times and I absolutely didn't see the twists coming. I did find one twist needed a grain of salt - but just go with it.

I liked Meredith as the lead character. She's kind and good, but perhaps too trusting - I'll leave it at that. Her son Leo also has a voice and his is quite real - and heartbreaking at times and the same with Delilah's chapters. There are a number of supporting players (and suspects). As this is a domestic suspense read, you'll find many neighbours and friends with their own opinions - and agendas.

There are some dark moments for sure and some of those might be triggers for gentle readers.

I loved that Harper Audio decided to use a cast of readers for Local Woman Missing -  Brittany Pressley, Jennifer Jill Araya, Gary Tiedemann, Jesse Vilinsky. It just seems to make things more 'real' if you will. I've said it quite often, but I find I get more immersed in a book by listening and having a cast really adds to that. With four voices it was easy to know who was talking. Each narrator brought something to their character(s) with their voice - fear, anger, disdain, uncertainty and so many more emotions to their role. I thought each reader interpreted Kubica's work really well. Each spoke clearly, was easy to understand and the speaking pace was just right. The action was transmitted well also. Hear for yourself - listen to an audio excerpt of Local Woman Missing.

I like a cast of characters in an audiobook as well. Makes for a better listening experience.

Lots of positive reviews on this book. Thanks for yours.

Thanks for stopping by Mystica - hope you get a chance to read/listen to this one!