Do Something for Nothing - Joshua Coombes

Joshua Coombes' new book, Do Something for Nothing: Seeing Beneath the Surface of Homelessness through the Simple Act of a Haircut, has just released.
Preconceptions. We're all guilty of it to some degree I think. I've worked in a setting where I did serve the downtrodden, the poor, the mentally ill and the homeless. The best tools I used were common courtesies - looking at someone directly, saying hello with a smile. "When you’re on the fringes of society, being noticed can mean everything."
Joshua Coombes had some additional tools in his backpack - his hairstyling tools. He has travelled across many countries, seeking out the homeless and offering them a haircut, a conversation, a chance to be seen and heard - and friendship. This simple gesture has become - #DoSomethingForNothing -a movement that encourages people to connect their skills and time to those who need it.
In the book, we see a 'before' picture of someone living rough and then we meet the person, hear their story, their hopes, regrets, love, loss, joy and more. And at the end of the essay, a second photo with the haircut. The smiles at seeing such a change are priceless. Such a simple gesture boosts someone's mood, what they think of themselves - and what society thinks of them. And while the haircuts are of value, it is Coombes' interest, caring and friendship that are of greater value.
Hopefully, you can take inspiration from Coombes and this book to really 'see' someone, to hear them, to question what you could do for nothing... whatever that might be. 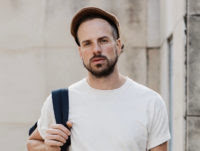 "Joshua Coombes is a British hairstylist and founder of #DoSomethingForNothing—a movement encouraging people to connect their skills and time to those who need it. When Coombes launched the project in 2015, his intention was to positively impact people’s lives by offering free haircuts to those experiencing homelessness. By posting transformative images on Instagram, his platform continues to grow as he amplifies the stories of many that go unheard. Coombes’s mission caught the attention of media outlets in Europe and has rippled worldwide. Coverage includes appearing in National Geographic’s new series The Story of Us with Morgan Freeman, released on Netflix internationally. Today, Coombes continues his efforts in new countries, humanizing this issue globally. He currently resides in London, UK. Do Something for Nothing is his latest work."
Posted by Luanne at 8:00 AM

I found this book a while back while on Amazon, I added it to my list to read and hope to get to it soon.

You will definitely enjoy it Vicki - very thought provoking.