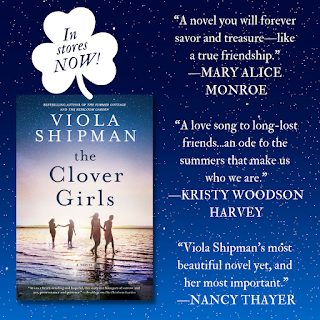 Oh, here's a just released book you'll want to add to your summer reading list - The Clover Girls by Viola Shipman. (It's on my list - watch for my review!)
What's it about? From Graydon House Books:
""Like a true friendship, The Clover Girls is a novel you will forever savor and treasure." —Mary Alice Monroe, New York Times bestselling author
Elizabeth, Veronica, Rachel and Emily met at Camp Birchwood as girls in 1985, where over four summers they were the Clover Girls—inseparable for those magical few weeks of freedom—until the last summer that pulled them apart. Now approaching middle age, the women are facing challenges they never imagined as teens, struggles with their marriages, their children, their careers, and wondering who it is they see when they look in the mirror.
Then Liz, V and Rachel each receive a letter from Emily with devastating news. She implores the girls who were once her best friends to reunite at Camp Birchwood one last time, to spend a week together revisiting the dreams they’d put aside and repair the relationships they’d allowed to sour. But the women are not the same idealistic, confident girls who once ruled Camp Birchwood, and perhaps some friendships aren’t meant to last forever…" Here's an excerpt of The Clover Girls.
"#TheCloverGirls by @viola_shipman is in stores NOW! Grab a copy of this "beautiful novel" (@nancythayer) that @kristywharvey calls "a love song to long-lost friends, an ode to the summers that make us who we are." Sweet, nostalgic, and loaded with 80s references, THE CLOVER GIRLS is the tale of four women whose friendship was formed at the Lake Michigan summer camp of their youth. Shipman deftly explores how the bonds of friendship are tested over time, and the value of never losing sight of the people and places that make us who we are. As @maryalicemonroe says, "Like a true friendship, THE CLOVER GIRLS is a novel you will forever savor and treasure." @graydonhousebooks @authorwaderouse #summerreading #beachreads #authorsofinstagram"
Posted by Luanne at 8:00 AM

I've read similar stories - reunions which never ended well because people have changed so very much.

That's true Mystica. We remember people as they were with rose coloured glasses on....