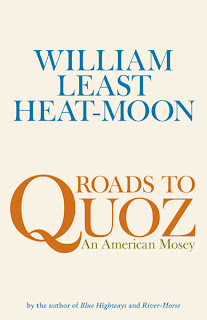 Quoz - n. - referring to anything strange, incongruous or peculiar, at it's heart is the unknown, the mysterious. Rhymes with Oz.

I've had this book for a little bit now, but it isn't one you want to race through at all. It's a fairly hefty book at 550 pages plus, but you need to stop and savour each and every tale.

William Least Heat-Moon landed on the New York Times bestseller list in the early 80's with his first book Blue Highways. Heat-Moon had lost both his job and his wife and decided to travel the back roads of America to see who he would meet and what he would find.

Heat-Moon is discovering hidden gems again with his female companion, Q, in Roads to Quoz - An American Mosey from Hachette Books.

"If you leave a journey exactly who you were before you departed, the trip has been much wasted, even if it's just to the Quickee-Mart."

This journey begins in Arkansas following the path of the Ouachita River. Heat-Moon's inherent curiosity about anything and everything is infectious. What are the origins of such placenames as Smackover, Hog Jaw and Possum Grape? I drove through a small town I'd never been to before the other day and found myself wondering how it came to be named Harmony. That's the captivating thing about Roads to Quoz - once you read of Heat-Moon's travels and interactions you look at things just a little bit differently - and from my point of view, that's a good thing.

This book covers a series of trips taken to various states. The history of each town or place is discussed in fascinating detail. But it is the human stories that captured me the most. Meeting Jean Ingold, with whom he has corresponded by letter for many years. Jean lives in a home of 117 sq.ft. She supports herself minimally, restricting her carbon footprint as much as possible. Her philosophy of life is engrossing. Travelling to the town where his great grandfather was murdered. The Goat Woman of Smackover Creek, who lived for fifty years in a 6x20 travelling medicine show truck. Meeting the caretaker of Jack Kerouac's original scroll manuscript of On The Road. The everyday people who stop in a diner and share part of their lives with him. There are numerous other stories, all equally compelling.

How does he find these tales? He opens himself to 'letting himself be found.' Heat-Moon's gift is his view of life and the ability to put to paper and share his curiousity.

I haven't read Blue Highways, but will be seeking it out after reading this book. And taking the lesser travelled road a little more....
Posted by Luanne at 7:02 AM

I won this book back in September, its on my TBR pile. Great Review.

I went to college in Conway, Arkansas, which is halfway between Pickles Gap and Toadsuck Ferry. Also I know how to pronounce Ouachita (Wash-it-taw).

Wow! It sounds like I need to get to this one soon.

Jeanne - What fascinating placenames! I especially like Toadsuck Ferry. Did you ever know the origin of them?

I have had this on my shelf for a few months now but haven't gotten around to reading it yet.

Here's what I found (and remember) about the origins of Toadsuck Ferry:

Yes, that story about rivermen sucking on bottles and swelling up like toads is the story that keeps getting reprinted in the Arkansas history books and keeps getting repeated. The story first appeared in a "history" written by a guy named Alsopp, who had some pretty soft standards, scholastically speaking. In the absence of evidence, he would simply report whatever bogus story he had on hand.

Here's what I do know about the origins of the name Toad Suck: Today there is a park by the Arkansas river named "Toad Suck Park." At this point there was once a ferryboat called the "Toad Suck Ferry" which would carry a couple of cars across the river on each trip. The ferry was named for a public house, a shack of sorts which might have served as a saloon, hotel, storage shed or any number of purposes. The structure was called "Toad Suck," and one or another structure was in that spot at least back into the nineteenth century.

That's it. That's all we really know. The story about the rivermen swelling up like toads is 100% invention. As long as you're going to invent something, we should at least base it on evidence that we do have. Here's my favorite explanation. The shack, being located at a ferry point, where the road met the river, was propitiously located to serve as a storage depot for crops and local products as they awaited barges for transport. This area has long produced sugar cane, sorghum, molasses and the like; and since many place names around here are anglicanize corruptions of French words (Aux Arcs became Ozarks, for example), I suggest that Toad Suck is an English corruption of the French "Taudis Sucre," meaning "sugar shack."] [Russell T. Johnston, 12/21/1997]

Jeanne - thank you for the follow up!! The English corruption of the French sounds like it might be the truest explanation, but I enjoyed the 'urban myth' explanation as well.

I really enjoyed your review.

I know how the town of Harmony, Pennsylvania got it's name. If it is the Harmony that the author refers to.

There were a group of Amish/Mennonite/ Quaker type people who called themselves the Harmonites. They were supposedly celibate, hence their sect died out. But they named their town Harmony.

I have a daughter named Harmony. It has nothing to do with the Pennsylvania town. I just liked the name.

I listening to the podcast at the Tattered Covered Bookstore the author gave about this book as I write this.

That's a neat piece of history about Harmony, Penn. The Harmony I mentioned is up here in Canada - I really should look into it. Placenames are fascinating. Harmony is a beautiful name for your daughter. You're right - he is a fascinating man with a really different outlook on the world. Thanks for stopping by!