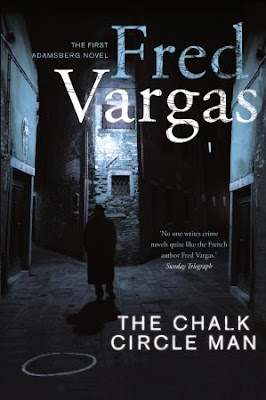 ~Translated from the French by Sian Reynolds ~

I always enjoy discovering the first in a new series. The Chalk Circle Man is the first Adamsberg novel.

Commissionaire Adamsberg has recently been posted to Paris. His new Inspectors are not quite sure what to make of him. Quite frankly no one is. He always seems distracted, constantly doodles and often just sits there staring into space. And yet -

"...he had solved , one after another, four murders in a way that his colleagues had found uncanny..."

The local press has taken note of chalked blue circles that are popping up accross the city. They encircle discarded rubbish- hats, lighters, whatever seems to be lying around. Adamsberg has a feeling about these circles and instructs his team to photograph and note all of them. His premonition is proven right when a woman's body is found circled in blue chalk.

A local oceanographer and her lodgers - a blind man and an older woman obsessed with personal ads seem to have some connection to the mysterious circles, but they are less than forthcoming. And this is where the character of Adamsberg shines. He waits for things to happen, for connections to show themselves, all to the consternation of his Inspectors.

The Chalk Circle Man is populated by odd and unsettling characters whose minds operate in distinctly non linear fashion. The conversations between these characters is nimble and thought provoking. I was captivated throughout the entire novel. Jean-Baptiste Adamsberg is a delightful, quirky, outside the lines sleuth. I will be waiting for the second in this series.

Oh, and Fred Vargas is an award winning female author!
Posted by Luanne at 7:30 AM

This sounds good to me because I love the setting (Paris, who doesn't?) and I love odd characters (in books and real life).

I'm intrigued by your descriptions of the characters. Great review!

Definitely sounds like something I would enjoy reading. Thanks so much for the review

Guess I'll "hop the Channel" and take a break from reading about brooding British detectives! This sounds really good!

I added this to my TBR list. I'm going to have to quit my job and take up reading full-time.