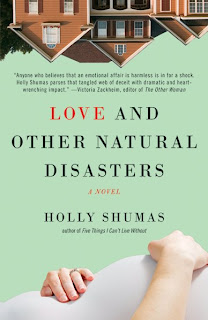 This month, the selection is Love and Other Natural Disasters by Holly Shumas.

At a family Thanksgiving dinner, eight months pregnant Eve goes to check on her husband, who been on the phone for quite awhile. She overhears him "speaking to someone with great tenderness." When she questions him on who it was, he replies....just a friend. Eve ends the dinner and pursues the question further. Her husband Jon admits that he has been emailing and talking on the phone almost daily to a woman for almost a year, but there has been no physical intimacy. She asks him to leave.

" Did I believe that Jon loved me? Yes. But the value of his love - our love - changed that night. And what do you do with devalued love?"

Her family and friends are all relieved that he hasn't had sex with this woman - surely it's not so bad then?

What an interesting question. Is a physical affair worse than an emotional affair? How can they be compared or measured? Both are betrayals.

I found myself greatly disliking the husband at first, immediately branding him the wrongdoer. It was cut and dried as far as I could see. Eve goes through many stages. Some of them I had difficulty with, especially at the end, which left me somewhat conflicted. I enjoyed the supporting cast of characters, especially the brother Charlie, who moves in with Eve and faces his own growing pains. Eve's friends are somewhat predictable, but are used to present both sides of the equation.

Shumas, who is a practicing family and marriage therapist, has created believable characters faced with real life dilemmas. She explores the anatomy of a marriage. What led up to this emotional affair? Can this perfidy be forgiven? Can a marriage survive this? Would you want it to? Thought provoking and sure to engender discussion, this would be a great choice for a book club.

As part of the giveaway ( still open until January 29th!) for copies of Love and Other Natural Disasters AND Holly's first book Five Things I Can't Live Without, readers were invited to leave a relationship question for Holly to answer. Holly has graciously answered three questions below.

Q: What would be the warning sign of a spouse having an 'emotional affair'? the same or different from regular flavor affair? I think maybe it would be harder to detect since there wouldn't be 'physical' evidence.

A: That’s a really good point. There is a lack of the traditional, film-noir kind of evidence (lipstick on the collar, the smell of perfume, etc.) I think that’s part of why the person who’s having an emotional affair can deny to himself or herself that anything is going on. They can point to other people and say, “Now that’s an affair.” But I think some of the more subtle signs are the same: Your partner seems unusually distracted, and it’s gone quieter between you. There might be changes in your sex life—either more sex, because the other person might be nursing a fantasy of someone else, or less sex, because there’s a sense of disconnection between you. There’s just a different level of intimacy. Intimacy is hard to define, but you know it when you feel it (or when you’ve stopped feeling it.) It’s important to go with your gut, and be communicative.

Q: I seem to be terribly critical of lots of things hubby does that are really petty. For example, how he loads the dishwasher. What should I do to get over these incredibly stupid things?

A: Start by asking yourself if the stupid things are an indicator of some bigger complaint you have about him. Does the way he loads the dishwasher remind you of something about his character that’s really bothersome to you? (Just as an example, if he’s sloppy with that, do you feel he’s often sloppy about things that are truly important to you?) If that’s the case, you’d want to address the underlying stuff with him, figure out what he needs to change and what you need to accept (it’ll usually be some of both, but acceptance comes easier when you see the other person trying.)
If a dishwasher really is just a dishwasher, then you’d have to look within yourself. Do you feel a strong desire to control your environment, or the people in it? Or are you dissatisfied with other things about your life and you’re just taking them out on him? It seems like you need to dig around for the root cause so that you can decide what to do about it.

Q: What are the most effective communication tools/skills in a marriage?

I think trust is an often overlooked aspect of communication. When we trust our partner to take us seriously and to have our best interest at heart, we speak and listen differently. It’s the foundation for a productive conversation. So that’s the first thing to consider. The best tool in my mind is a classic: the “I” message. Instead of saying, “You did x wrong,” you say, “I felt x when you did y.” That way, you take responsibility for your reaction, instead of just blaming. Good skills to practice are: being able to articulate feelings besides just anger (beneath the anger is usually disappointment, hurt, or some other pain), not backing down from something you really care about or pretending it’s okay when it isn’t, and truly listening and not just waiting for your chance to talk again. So much of effective communication comes down to owning our feelings, stating them respectfully, and respecting the other person’s perspective. Easy to say, sometimes hard to do. But it gets easier the more you practice.


Check out some of the other stops on the tour!

Write for a Reader
Bermudaonion's Weblog
What Have I Read Lately
Cafe of Dreams
A Blog of BooksFor You
A Circle of Books
At Home With Books
My Friend Amy
The Tome Traveller's Weblog
Booking Mama
2 Kids and Tired Book Reviews
S. Krishna's Books
Enroute to Life
A Novel Menagerie
The Printed Page
Cindy's Love of Books
Bookopolis
Books Ahoy
B & b ex libris
Jenn's Bookshelf
MarjoleinBookblog
Linus's Blanket
Posted by Luanne at 6:30 AM

Great review! I don't know how I missed this tour, but I did. Drats! Anyway, this sounds like an interesting book that raises some important questions about marriage. I'll have to check this one out.

You did a great job of describing this book without giving anything away. I had problems with how Eve handled things towards the end of the book.

Wow! What a great post. I love your questions at the end.

AWESOME Q & A and review. I also enjoyed the supporting "cast".. Charlie especially.

Great Q&A. Love that Holly can offer real-world advice as well as being a great novelist!

Just followed your link from LibraryThing. I think this sounds like an interesting book - it does raise a lot of questions. I may suggest it for my RLBC. I like your blog btw!

Mom - you know my taste in books.
What is one I should check out?
After reading inside out girl, I am getting back into reading again! I am actually missing having a book!

Luanne, I just noticed that you posted on my review, as I was about to post a comment on yours!

Great review and I really enjoyed the questions you asked Holly.

fantastic review. I would love to read this one...how did i miss this early bird tour, I'll never know. LOL

I loved the interview questions. I learned alot about emotional affairs just from this post.