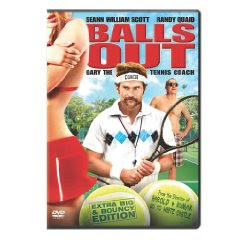 I took up the offer to watch and review this DVD based on some of director Danny Leiner's previous work - Harold and Kumar go to White Castle and Dude, Where's My Car? Not necessarily my taste, but that of my husband and older teenage son. Looking at the cover gives you an idea of the type of movie it's going to be. So they watched it without me with the warning that I would be asking them what they thought. Lots of laughter from both of them from the other room. Not so articulate in review material. They did think the lead guy- Sean William Scott- was pretty funny. Actually I do too - he was the son in Mr. Woodcock. So I watched it too, screening the Canadian version. Randy Quaid is also featured, but not long enough.

Gary is a washed up tennis player. He lands in a small Nebraska town and ends up as the high school janitor. He joins Randy Quaid as a tennis coach and attempts to take a team of misfits to the state championships.

This is definitely not a family movie. There are lots of sexual jokes, drug use, bathroom humour, some nudity and completely un-politically correct dialogue. But if you're looking for a totally irreverant, raunchy adult version of Bad News Bears, you'll find some laughs here.
Posted by Luanne at 10:09 AM

Well this is a coincidence because I just saw this movie sitting on my kitchen counter this morning and I have no idea who brought it home! At least now I know what it's about.

That is a coincidence! And it doesn't even release until Tuesday!

LOL just from looking at the cover I can tell what the movie's going to be like haha :)