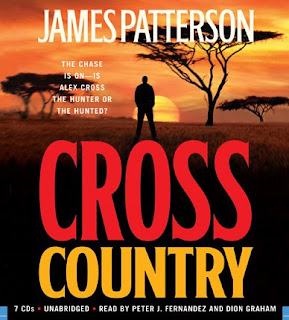 I've read all of the Alex Cross series, but this was the first one I listened to in audio format. It was different in that it was narrated by two readers - Peter J. Fernandez, who has been the voice of Alex on many titles and Dion Graham, who is the voice of the Tiger. I had an idea in my head of what Cross should sound like. It's pretty much Morgan Freeman who played Cross in the movie adaptation of Kiss the Girls. And Fernadez's voice fit the image I had. Also interesting was the use of music to underscore tension and action scenes. I thought it added to the audio book.

Cross Country finds Detective Cross called in to a home invasion where the entire family was murdered, butchered really. It is someone from Alex's past. And then the unthinkable - it happens again..... There are rumours of a shadowy figure called the Tiger who is systematically targeting entire families - all who seem to have a connection to Africa. Most frightening is that the Tiger's gang is made up of teenage boys. Alex follows the Tiger to Africa. Cross is completely unprepared for what he finds. Pulling from today's headlines Patterson has detailed atrocities that are all too real.

Cross Country stays true to Patterson's trademark short chapters with cliff hanger endings. They are numerous - I found myself predicting how many the narrator would announce by the end of the book ( 150 something!) I enjoyed listening to this book in audio format and would most likely choose to do it again. It made the drive to work go faster!

Want a copy for yourself? Enter the giveaway here!
Posted by Luanne at 8:33 AM

Great Review Luanne. I am reading this book now and really enjoying it. I am a huge Patterson fan.

I read this book and really enjoyed it. I bet it was good in audio format.

Oh this sounds pretty tense. I have already won and audiobook of this one so I am looking forward to receiving it. Sounds like I may be gripping my steering wheel as I am listening to it though!

I've got this on audio but haven't had a chance to listen to it yet. I'm glad you enjoyed listening to it and great review Luanne.

An enjoyable read Cross Country by James Patterson. loved the way you wrote it. I find your review very genuine and original, this book is going in by "to read" list.