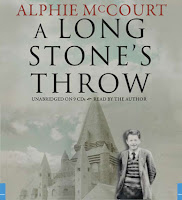 Who is Alphie McCourt? He is the youngest brother of Frank McCourt, Pulitzer prize winning author of Angela's Ashes and Malachy McCourt, a New York Times bestselling author.

Both older brothers have written memoirs detailing their impoverished upbringing in Limerick, Ireland, their emigration to the United States and the success they both found.

I listened to this in audio format. It was read by the author. It opens with-

"I often don't talk much. There is a rhythm to talk, a definite beat, sometimes my mind wanders and I lose the cadence of the conversation."

During the first disc I found McCourt's manner and rhythm of speaking to be slow and dull with little inflection. However, McCourt's Irish lilt is pleasant and I was soon caught up in his tale. He often breaks into song as well.

He begins telling his story when he is in his twenties and living in New York. The tale heads back to Ireland for childhood memories and then back to the U.S. Much of the childhood was something I had heard before, having read his brothers' memoirs.

I found some of the stories to be so detailed that I wondered if McCourt had kept comprehensive journals or diaries or he was embellishing his memories. Although interesting, I found some of the minutiae to be a bit boring at times.

Alphie McCourt struggled with alcohol through much of his adult life. He worked a variety of jobs, eventually finding success in the restaurant and bar business.

You can listen to an excerpt here. Want a chance to own your own copy? Enter the giveaway here!
Posted by Luanne at 7:31 AM

Don't enter me - I'm listening to it right now. So far, my assessment is much like yours. I really do enjoy his accent and singing and I enjoyed his time in Norfolk because I grew up there. I'm at the point where I want something to happen, though.

I think the Irish accent is about the most relaxing thing in the world....almost as good as a hot bubblebath and smelly-candles! ;)

I'm going to your giveaway post right now! I love Irish accents and I've read all of Frank McCourt's books. Sounds like an interesting book.

Ooh sounds like a good one! I love that Irish lilt too :)