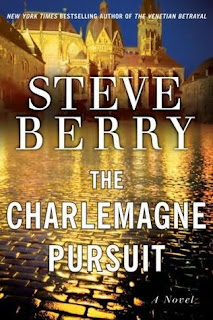 I read Dan Brown's Da Vinci Code when it came out and enjoyed it. But then I discovered Steve Berry and haven't looked back. As far as I'm concerned he's the master of this genre, combining historical fact with suspense, intrigue and non stop action.

Berry's recurring character is Cotton Malone, a 'retired' government agent. His father Forrest died in a submarine accident in 1971. For years he has tried to find out details, but has been stymied by the Navy. He pulls in a favour and gains access to highly classified documents - his father's sub was on a secret mission to the Antarctic. When he is contacted by the German family members of another of the doomed submariners, he agrees to embark on a search for the truth. And that truth is a shocker. The other family holds documents that show the submarine was out to prove the existance of a 'First Civilization' - a culture that evolved long before history as we know it. There seems to be evidence that Charlemagne had knowledge gained from this advanced culture. The Nazis looked for it in 1938 and the Americans went back in 1971.

The Charlemagne Pursuit is a thrilling read. The plot is intricate and involved, with many seemingly disparate stories converging at the end in a gripping climax. Berry's research is intriguing. I found myself stopping and actually looking up some of the events and history he refers to. One example is the Piri Reis Map. Much of it is true and thought provoking. There is a writer's note at the end indicating what is fact and what he has taken fictional liberty with.

Cotton Malone is an engaging character, one I've enjoyed following the previous six novels. The supporting characters are also well written, but I did find the German sisters a bit over the top at times.

Any of his books can be read alone. Read one and I guarantee you'll be looking for others in the series!
Posted by Luanne at 7:48 AM

I've never read one of his books but you sure make them sound good. I may have to check into them one of these days.

This is the second positive review I've read for this book, so I guess I'll make sure to check it out. :P

My husband and I both practically salivate when we know his new book is coming out. Love him!!! I thought the Amber ROom was excellent although it is one of his older books.

This has been on my wishlist for months now and your is the first review I've seen. I'm so happy the books are as good as they sound!

It sounds like I need to try some of Steve Barry's work.

I cam across Steve Barry's books in stores but never picked it up... Well after reading this review i think i have to start reading his works..

By the way nice blog and a treat for a fellow book worm...