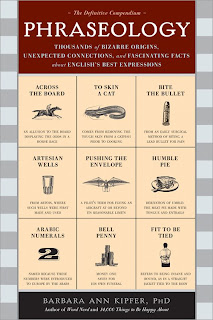 ~The Definitive Compendium~
~Thousands of Bizarre Origins, Unexpected Connections and Fascinating Facts about English's Best Expressions~
Oh, Phraseology is a trivia buff's dream. Or anyone who loves words and language. My son is of the first persuasion. He loves books like this and promptly snagged it.
Phraseology is one of those books you want to share. I had just as much fun listening to him quiz me on phrases as he did reading it. Some I knew, but some were complete surprises.

Here's a few to whet your appetite -

"To skin a cat" - comes from removing the tough skin from a catfish prior to cooking.

"Fit to be tied" - refers to being insane and bound, as in a straight jacket tied to the body.

This is a great book to leave on the coffee table - it can be picked up and read at whim.

I enjoyed the origin phrases, such as those listed above, the most. Some entries read more like dictionary entries that most people would already know, such as lie detector and celery seed. Some of the facts I found a bit uninspiring - "Asian elephants are smaller than African elephants". Based on the subtitle, I was looking for entries that were more 'bizarre', 'unexpected' and 'fascinating'. Still, this is a fun book to have around the house.

Dr. Barbara Ann Kipfer has been a lexicographer and linguist for 25 years and is the author of more than 30 books. Word Nerd is also from Sourcebooks.
Posted by Luanne at 7:08 AM

That sounds like something I'd enjoy and then I'd drive everyone crazy with what I'd learned.

Oh my gosh, what an awesome book!