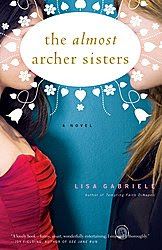 I knew I had a doctor's appointment after work the other day, so I quickly stuck The Almost Archer Sisters in my bag to take with me. My doctor is invariably behind, so an hour and a half later, it was my turn. But honestly, I was so engrossed in this book, I really didn't notice how much time had passed. (I was in a much better place than those stuck reading outdated Sports Illustrated)

Releasing tomorrow from Random House Canada, this second novel from Lisa Gabriele is one of those books that is a found gem - one you have to let your friends know about.

It tells the story of two sisters who were raised on a farm in Ontario. Beth is a wild child who pushed the boundaries of everything growing up and continues to do so as an adult. She fled the farm and moved to New York to pursue a successful career. The other sister Georgia, but known to all as Peachy, stayed at home. She got pregnant and married before she finished her social work degree. Her husband, Beau, was Beth's first lover. Their father, Lou, a draft dodging hairdresser, also lives on the farm in a trailer.

Beth's life seems be unravelling and she is coming home to the farm for more frequent visits. Peachy's life is stressful as well. Her son Sam has severe epilepsy. Her focus lately has been on his health, not on her other son and husband.

Things come to a head during one Beth's visits. Peachy gets up in the night and walks in on her sister and Beau - and they're not playing cards.

What could have precipitated such a betrayal? Can any relationship - the siblings, the husband and wife, the father and daughters - ever recover or be rebuilt after such perfidy?

Gabriele's writing is at turns funny and poignant but above all else it is real. I was captivated by the characters and could not put the book down. It was Peachy who captured my heart - she's someone you would love to really know. The ending isn't cut and dried, leaving you to form your own conclusions. This would be a great selection for a book club. And I have another wonderful Canadian author to put on my favourites list!
Posted by Luanne at 7:37 AM

This sounds good - and I totally know what you mean about being better off than the magazine readers in the dr's office. What do people do who don't take books everywhere?? =)

This sounds like a great book...I wouldn't be caught without my book at the doc's either!

Nice review, Luanne! I always bring a book to the docs too. :) You never know how long you will wait.

I will certainly keep this book in mind! :)

Have a great day!

I didn't really find this book funny, but i agree that it was a good read. :) I carry books with me everywhere.

Luanne - this sounds like a good book...the kind that fits in between two "not so great" books you have to read. Sometimes it nice to fit a "want to read" book in there and this one sounds good!

Sounds good! I've got a couple doctor's appointments next week, so I should get a lot of reading done.

"My doctor is invariably behind, so an hour and a half later, it was my turn. But honestly, I was so engrossed in this book, I really didn't notice how much time had passed."

What an endorsement! I want to read it on that alone. Anything that can make me forget that I am waiting in a doctor's office has got to be better than great.

Sounds good, and I've never heard of this Canadian author. Thanks for the introduction!

Luanne, this book sounds fantastic. Oh - and I love the cover. Great review.

I have a book in my purse 90% of the time....and always need it the other 10%.
Nive review. I have to chose for March's book for our book club, so this just might be the one!

I saw this one on Random House and it sure does sound good-great review by the way. I never, ever go to the doc's office without a book. One thing I don't like is looking through magazines that who knows how many others have. lol.