The Bodies Left Behind - Jeffery Deaver 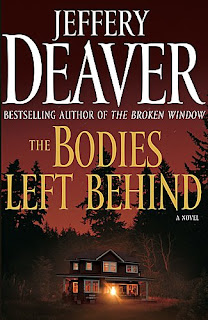 Jeffery Deaver is one of my favourite thriller/suspense authors.

He is the author of the successful Lincoln Rhyme series, about a paralyzed detective who solves crimes based on the evidence gathered by his protege Amelia Sachs. This was made into a successful movie staring Denzel Washington and Angelina Jolie.

But I digress. The Bodies Left Behind is a stand alone novel. Deputy Brynn McKenzie is just home for the night with her family when her boss asks her to check out a house on a sparsely populated lake. It could be nothing, but there was a 911 call that got cut off. Maybe it was a misdial. She heads up to the lake, finds the house and walks into a horrific crime scene - and the perpetrators haven't left the area yet. They're still looking for the female houseguest that escaped the carnage. Brynn finds her first and they're on the run into the State Forest that surrounds the lake with the killers hot on their trail. The killers have also called the 911 in as a false alarm. There will be no police help on the way for Brynn and Michelle.

This is a nail biter of a novel, with lots of twists and turns that you don't see coming. Deaver's characters are always more than two dimensional. The bad guys aren't cardboard cut outs - their personalities are developed as much as the protagonists. You'll be turning pages to get in just one more chapter before you turn off the light.

I like John Sanford's work, so I'll have to try one of Deaver's books.

This sounds awesome Luanne. I'll have to try it out. I'm a huge fan of Barclay so I'm guessing I'd like it. Great review as always.

I'm Pizza, I also have a blog on books, please take a look and tell me what you think:

I keep meaning to read other books by him but I've only read The Bone Collector.

My husband and I both love Jeffrey Deaver. His books always evoke a gasp in conjunction with a "never-saw-that-coming!" :-)

Oh, this sounds good! I love the Lincoln Rhyme series so I can't wait to read this one too. I'll be looking for it!