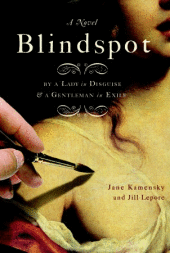 Blindspot, just released from Spiegel and Grau, is an wonderful piece of historical fiction. Wonderful just isn't enough - it's ribald, witty, charming and oh, so much more.

Jane Kamensky and Jill Lepore are both renowned history professors. They've joined together to produce this novel.

Blindspot tells the tale of young Fanny Easton, a 'fallen' woman from a good family. She has been working in the Manufactory in Boston in 1764, barely surviving. When she spies an advertisement for an artist's apprentice, she sees a slim chance to escape her life of poverty. She disguises herself as a boy and applies to Stewart Jameson as Francis Weston. She does possess artistic ability and is taken on. Unbeknownst to her, Stewart Jameson has fled to the colonies from Scotland, where he is wanted for debt evasion. His debt was incurred trying to buy the freedom of his friend, the brilliant, black Dr. Alexander. Boston in 1764 is resisting the heavy hand of England and it's taxes. Slavery is an issue being hotly debated and political unrest is rampant. When a death (or could it be murder) occurs, the three are deeply involved.

Kamensky and Lepore have skillfully woven historical fact with literary license to create an engrossing, clever tale. It is told in alternating viewpoints. Jameson is writing his take on things to "Dear Reader"in his journal, while Fanny (Weston) is writing letters to a childhood friend. I was captured by the language and tone of the book - the puns, plays on words, language used and the social fabric of Boston in 1764. The depth of historical fact woven in adds to an already rich story. Blindspot is a love story as well. Some readers may be offended by some of the sexual scenes, but they are integral to the book.

The authors have created an excellent website for the book as well, providing further insight. Although the book is 500 pages long, it never flagged for me. The storyline was compelling right to the last page. However, I wonder if there will be a sequel? The ending has been left open for one. I hope so!

Fans of Emma Donoghue would enjoy this book.
Posted by Luanne at 7:19 AM

Great review! I love Boston, so I have to read this one.

Great review - it makes me want to read the book.

Nice review...I love reading books from this time period so I may have to add this one to my list.

I can't figure out why the name Jill Lepore is jumping out at me - maybe I've seen another review of this... I'm adding to my tbr - THANKS!

Great review. I've seen a few reviews of this one and really want to read it.

Nice review --- I am coveting this one!