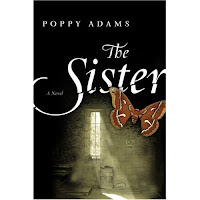 The novel opens with Ginny Stone awaiting the arrival of her sister Vivi, who she has not seen in over forty years. Ginny still lives in the family mansion in a small English village, but it has seen better days. It is crumbling around her and she has confined herself to four or five rooms. She has no television, no phone, no radio and no visitors. She never leaves the house. Provisions are brought by the son of one of the old caretakers every couple of weeks. She is obsessed with time.
" When you live by yourself in a house that you very rarely leave and is even more rarely visited, it's essential that you don't lose track of the time. Every minute lost- if left uncorrected - would soon accumulate to an hour, and then hours, until - as you can imagine - you could easily end up living in a completely erroneous time frame"

"What I fear is timelessness, a lack of structure in my life, an endless Now."

Ginny followed in her family's footsteps, becoming a renowned lepidopterist, a scientist who studies butterflies or moths.

Vivi on the other hand, yearned to escape what she saw as a limited and suffocating environment. Although Ginny is the older sister, Vivi was always the leader, the dreamer and the adventurer. The girls spent all their time together and seemed inseparable. Vivi seemed to take after their mother Maud - who loved company and entertaining. Ginny took after their father Clive - who was happiest when not with people.

Vivi does escape to London, where she makes a life for herself.

When Vivi arrives, the reunion is awkward. Their memories of childhood and their parents seem worlds apart.

The story is told from Ginny's viewpoint. We are tantalized by snippets from the past and then back to the present.

Adams has certainly done her research on the world of moths and butterflies. I must admit that I started skipping passages that detailed this. On the other hand, this detail just adds to drawing the characters of Clive and Ginny as this is their world.

Ginny's character is well developed. I was able to connect with her loneliness and confusion. The progression of her will as secrets, incidents and anger are exposed is very believable. Although we are left wanting to know more of Vivi's life away, this lack of knowledge is exactly what Ginny has. We can empathize with her confusion and unravelling.

This novel has a distinct Gothic feel about it. A delicious British tale of dysfunctional family relationships and the havoc they can wreak.
Posted by Luanne at 8:28 AM

Excellent review! I, like you, skipped a lot of the "moth stuff" as it seemed there was just too much of it, but the character of Ginny was most interesting to me. I liked the bobble hatted social worker also. Definitely a lot of suspense in the book.