Nothing to Lose - Lee Child 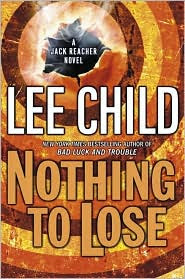 Lee Child returns with Nothing to Lose, the 12th novel in the Jack Reacher series.

Jack Reacher is an ex military cop, 10 years out of the service. He has no home, not ties and lives his life by a simple rule. Leave me alone and I'll leave you alone.

He arrives in Colorado between two tiny towns, Hope and Despair. To continue his journey forward, he heads towards Despair. It is in Despair that his simple rule is tested. It is a cold, spare, tired town. Jack heads to a diner for something to eat before he heads on his way, but unbelievably he is ignored. No one will acknowledge or serve him. Suddenly four big guys show up and tell him to get out of town. Reacher, being Reacher, refuses to go. The Despair Police arrive, he is arrested, convicted of being a vagrant and unceremoniously dumped at the line dividing Hope and Despair. He is picked up by a woman cop from Hope.

Well, now his interest is really piqued. Back to Despair he goes under cover of night. This time he finds a body in the scrub by the side of the road. What is going on? He finds an ally in the Vaughan cop. There are more missing young men, a huge industrial plant that seems to be recycling metal and one man who controls the town and everyone in it. No outsiders allowed.

Reacher is the quintessential hard boiled hero. No backing down, his own set of morals and tough as nails. There are no great emotional revelations from this protagonist.

Nothing to Lose has a very strong military story line. Fellow Canadians will find the following quote funny; "Canada's army is three men and a dog. They probably keep their stuff forever"

And the following quote quite telling, " Canada isn't fighting in Iraq. Canadians had more sense."

I have enjoyed previous Reacher novels, but this one somehow fell a bit flat for me. Too much political comment. The seemingly disparate plots come together in the end, but all a bit too conveniently. This is still a really good series, but if you've not read any before you might want to start with another.
Posted by Luanne at 8:13 AM