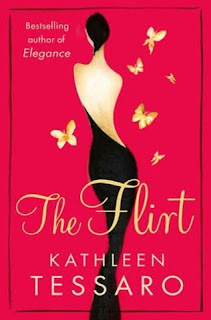 From the cover art I originally thought the novel was to be about a woman flirt. I was mistaken....

The Flirt is set in London, England. We meet Hughie Armstrong Venables-Smythe in the first few chapters. A would be actor, he is perusing the classifieds and spies an intriguing advertisement:

Hughie comes from aristocratic stock, but the family fortunes have paled and his name, posh accent, good looks and charm are what he's surviving on now.

We are quickly introduced to many more characters;

I've introduced the list of characters as in a playbill because that's the feel the book had for me. A delicious British romantic comedy. Somewhat along the lines of Oscar Wilde's play The Importance of Being Earnest. No farce, but lots of sly comedic lines and situations.

Everyone is living their lives, but recognize that they aren't really happy. Hughie is hired by Valentine and Flick. I won't go much further in divulging the plot. Suffice it to say that Hughie's new profession touches everyone's lives.

Each chapter is written from a different character's viewpoint. This did make the book hard to put down as I wanted to read yet another chapter before shutting the light off. Tessaro skillfully weaves all the stories together in a most satisfying ending - though not all as are you may have imagined.

There is some minimal sexual language used that may offend some readers.

This is a good summer chick lit book. If you like British authors such as Marion Keyes and Jane Green, you will enjoy Kathleen Tessaro. I read Elegance years ago and very much enjoyed it.
Posted by Luanne at 7:52 AM