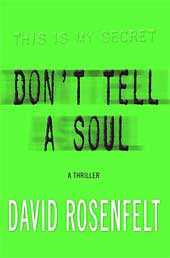 I've read a few of Rosenfelt's previous novels (there are six) featuring lawyer Andy Carpenter. They are good solid legal mysteries that have held my attention.

Rosenfelt's latest Don't Tell a Soul is a stand alone novel. The cover is eye catching and seems to promise a good thrilling read.

Tim Wallace's wife died in an boating accident. He was the only witness and although it was ruled an accident, Detective Jonathon Novack doesn't buy it. He is sure Tim murdered her and is determined not to let the case go.

Since his wife's death, Tim has shied away from going out with his friends. On New Year's Eve they finally get him out to their favourite bar. It is here that a drunken man asks Tim if he can keep a secret. He then tells Tim that he murdered a woman in a neighbouring town and where he buried her. "Don't tell a soul. Now it's your problem".

Tim does go to the cops and the woman is found exactly where the stranger said she would be. Trouble is - the cops think Tim murdered her as well and the evidence seems to be stacking up to prove them right.

This was a good read that kept me turning pages but some of the scenes and plots just don't ring true. Rosenfelt does a fine job of planting red herrings but I was disappointed in the ending which seemed to finish up rather abruptly for me. I thought it was a great premise but it just didn't deliver the punch I thought it would.

Don't Tell a Soul had overtones of the plots of Harlan Coben's Tell No One and Gone for Good.

I had this one my list to read. I'm still curious to read it, and to see if find the same issues.

The drunk guy never told him the name of the woman he murdered!! So how does Tim google her name?