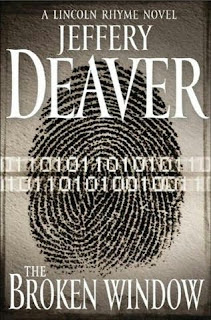 Lincoln Rhyme, Amelia Sachs and crew are back in the 7th book of this series by Jeffery Deaver.

Lincoln's estranged cousin, Arthur Rhyme is arrested on murder and rape charges. He claims he is innocent. Against his wishes, his wife Judy contacts Lincoln for help.

For those of you unfamiliar with this series, Lincoln Rhyme is a former police captain, injured on the job and now a quadriplegic. Amelia Sachs was a young aspiring policewoman who became Rhymes eyes as she "walked" crime scenes, gathering evidence for him. Together they have solved many crimes based on Lincoln's expertise with forensic evidence.

And that is what bothers Lincoln about Arthur's case - the evidence is just too perfect. The case seems airtight.

Some digging unearths two other cases similar to Arthur's. Further investigation leads to SSD - a data mining corporation. It seems the real perpetrator might be hiding behind walls of SSD.

Data mining is real and very scary. When you get to page 352, there's a dossier put together on one of the characters, listing literally everything. Purchases, habits, relationships, financial data, lifestyle, communications and lots more. It's quite frightening - think of all the loyalty cards you have, the debit and credit cards you swipe, the searches you do on the web.

The perpetrator is using this information to commit crimes and have someone else take the fall. He's always one step ahead of the police. Then he starts messing with their personal information and things take a turn for the worse.

The novel opens, closes and contains references to a case involving an assassin the Lincoln last encountered in 'The Cold Moon'. If you've not read it yet, you might find these references a bit confusing. I believe this is what the next Rhyme novel, due in 2010, will focus on.

Deaver is always a great read. The clues, evidence and the ingenious way they are used to pursue the case are fascinating. The Broken Window was very hard to put down at the end of the day.

I always enjoy finding a series that you can follow the character's lives as well as the mystery presented.

Fans of TV shows like CSI will enjoy this series. Faithful readers of John Sandford would enjoy it as well.