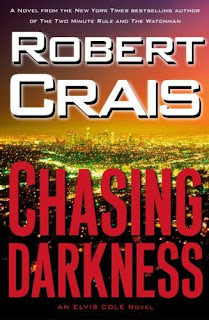 Crais returns with the 12th novel in the Elvis Cole series.

Cole is a Vietnam vet who has set himself up as a private detective.With tongue firmly in cheek, he bills himself as 'The World's Greatest Detective'. Sidekick Joe Pike, also a vet, works with Cole, but doesn't have a lot to say. His actions speak louder than words.

Chasing Darkness opens with police discovering Lionel Byrd, an apparent suicide victim. On his lap is a photo album with detailed death pictures of seven women. Three years earlier, Byrd was accused of the murder of victim number 5. He was set free based on evidence provided by Elvis Cole.

The cops come calling on Elvis. Cole is adamant that he didn't make a mistake - Byrd was innocent. But the evidence seems overwhelming. Consumed with guilt, Cole starts reinvestigating. But the cops aren't happy with Cole poking his nose in. As far as they're concerned, the case is closed.

Cole is a modern day 'hard boiled' detective. He has very firm ideas on right and wrong and a strong moral compass. Crais' novels feature good strong plots and lots of action. Anyone who enjoys Robert Parker's Spenser series or Lawrence Block would enjoy Elvis Cole
Posted by Luanne at 8:46 AM