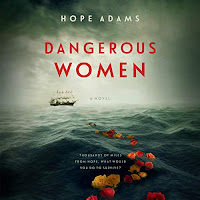 I stumbled across Hope Adams' new novel Dangerous Women in a library newsletter and knew immediately it was one I wanted to listen to.
What's it about? From Penguin Audio: (My thoughts follow)
"London, 1841. One hundred eighty Englishwomen file aboard the Rajah, embarking on a three-month voyage to the other side of the world.
They're daughters, sisters, mothers - and convicts. Transported for petty crimes. Except one of them has a deadly secret, and will do anything to flee justice.
As the Rajah sails farther from land, the women forge a tenuous kinship. Until, in the middle of the cold and unforgiving sea, a young mother is mortally wounded, and the hunt is on for the assailant before he or she strikes again.
Each woman called in for question has something to fear: Will she be attacked next? Will she be believed? Because far from land, there is nowhere to flee, and how can you prove innocence when you’ve already been found guilty?"
My Thoughts:
First off, I loved that cover! I was aware of the history of the prison ships that delivered convicts to Australia and Van Diemen's Land. (Tasmania) I think its a fascinating piece of history. Knowing the name of the ship from the publisher's blurb, I had a quick look online first - and discovered that Adams has based her novel on facts. You can find out more about the women on the Rajah here - names, sentences and where they were sentenced. The other thing I discovered was the Rajah Quilt. In the novel, a group of women work on this quilt on the journey. Today it hangs in the National Gallery of Australia. It is a stunning quilt. You can see it here.
Okay, history, quilting and a mystery - I just knew I was going to love this book! Adams' protagonist is ship's Matron, Kezia Hayter. She's quite young, but is fiercely protective up the women, standing up for them against the Captain, Ship's Doctor and the Ship's Reverend. These characters are also based in fact.
When one of the women below decks is 'grievously harmed', an investigation is launched. Adams gives a voice to a number of the women, allowing us to hear their stories, their wants, their regrets and their hopes for a second chance in Van Diemen's Land. And from Kezia's chapters, the desire to have her words and thinking taken seriously. Taking clues from their narratives, the listener/reader can narrow down the suspects.
I enjoyed every facet of Adams' novel - the women's stories resonated with me, the challenges faced by women in that time period are still relevant today. I enjoyed the slow resolution of the crime, solved by questions and deductions, a nice change from DNA solving the case in a matter of hours.
Adams captures the setting, with vivid descriptions of the below decks quarters, the joy in a patch of sun on deck as well as descriptions of the fabric and stitching. As the quilt grows, so does the camaraderie of the women, the pride in their work - and themselves.
I chose to listen to Dangerous Women. The narrator was Fenella Woolgar and she was the perfect choice. She captures the different tones, timbres and accents of the women. And also proved believable voices for the male characters as well. Her voice is clear and easy to understand and her speaking pace is just right. Hear for yourself - listen to an audio excerpt of Dangerous Women.
I really, really liked this one. Five stars for sure.
Posted by Luanne at 9:00 AM

This book sounds really good. I'm putting it on my to read list. Thanks for the suggestion..
Have you read or listened to The Taster by V C Alexander? It's a good historical fiction book. I listened to it last month.

I hope you enjoy it! The Rose Code is another great listen - also historical fiction. I hadn't heard of The Taster - thanks for the recommendation!