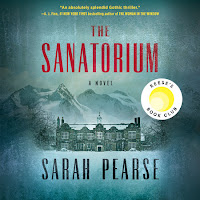 I was browsing my library's new e-audiobooks and came across Sarah Pearse's novel, The Sanatorium. I'm always a bit leery of celebrity endorsed books, but this one seemed to be the kind of tale I would enjoy.
The Sanatorium takes place in a luxury hotel high in the Swiss Alps. Did I mention it was built on the ruins of an old sanitorium, a murder occurs and an avalanche cuts the hotel off from the authorities? I love 'locked room' mysteries. This premise isn't new, but Pearse puts her own spin on things.
Elin and her boyfriend Will are visiting the hotel at the invitation of Elin's brother Isaac and his fiancée Laure. When Laure goes missing, Isaac insists Elin help him find her. After all, Elin is a British police officer. She reluctantly agrees as she is on medical leave because of crippling anxiety. Her own uncertainty bleeds into her investigation.
Each and every character, including the supporting players, is hiding something - which makes for a wealth of choices for whodunit. I love trying to spot the lies. Pearse does a great job of keeping the listener guessing. Without giving it away, there's more to the plot as the reason is finally revealed. (That reason has it's roots in reality.)
While the ending ties things up for this book, there's a nice little gotcha in the final chapter. I wonder if there might be another book featuring Elin? Or if this is a stand alone.
I often find I become more immersed in a book when I listen to the audio version. This was definitely the case for The Sanitorium. The reader was Elizabeth Knowelden. She has a lovely British accent. Her voice is pleasant to listen to, well enunciated and has a measured pace of speaking. She easily transmits Elin's panic, the suspense of the plot and the tone of the book with her voice. She created different voices for the other characters and they are believable. Hear for yourself - listen to an excerpt of The Sanatorium.
Posted by Luanne at 9:00 AM

Thanks for the review. I will be keeping an eye out for it

Thanks for stopping by Mystica - I hope you can get your hands on a copy or audio!