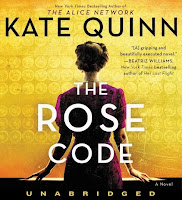 The Rose Code is bestselling author Kate Quinn's latest release - and it's another fantastic piece of historical fiction.
Quinn takes us back to WWII, Bletchley Park and code breakers. The Rose Code is told through three very different young women -  debutante Osla, self-made Mab and spinster Beth. Each brings with them a skill set that will help to defeat the Nazis.
But the narrative also takes us to 'after the war' in 1947. One of the three is in a desperate situation and needs the other two to help save not just her, but to find a traitor.
What is it about WWII novels that we enjoy so much? I think it's the people and their attitudes. Keep calm, carry on. Needs must. Honor, duty, loyalty, a sense of camaraderie and much more from not just those in uniform, but those holding the home front as well. And although we know the outcome of the war itself, there are so many stories to be told.
Quinn does a fantastic job telling this tale. The characters were all so different and wonderfully drawn. I loved Osla's sassy spirit, upbeat attitude and quick mind. Mab has overcome much to get where she is - she presents a hard front to the world, depending on no one but herself.  Beth has a brilliant mind, but has been stymied by her overbearing mother. The war gives her a chance to escape her heavy hand. Three unlikely women thrown together by the war. I can't say I liked one more than the other, they each brought so much life to the plot. Supporting characters are wide and varied and include Prince Philip with a cameo from Lilibet.
I was fascinated at the behind the walls look at Bletchley Park and what it took to break codes and how those breakthroughs shortened the war. Fact is woven through Quinn's plot as well - there were indeed traitors and spies passing on information. The mystery of who that is in The Rose Code is slowly played out in a back and forth from during the war and after.
Love - and loss - also play a part in The Rose Code. Wartime romance is much different than present day with distance and uncertainty playing a large part back then. The romances were well written, poignant and tugged at the heartstrings.
I chose to listen to The Rose Code. It was narrated by one of my favorite readers - Saskia Maarleveld. She has the most wonderfully expressive voice. She provided different voices for each of the three lead characters that very much suited the mental images I created for each. (I really did like Osla's!) There are many male characters as well and the voices and tones Maarleveld provided were believable. She captures the tone and tenor of Quinn's work easily with her voice. And the emotions of the characters as well. Her voice has a lovely British accent that is pleasant to listen to. She enunciates well and her speaking voice is well paced. Her voice has a rich tone to it. I've said it before and I'll say it again - when listening to a book, I find I am much more immersed in the story and that was definitely the case with The Rose Code. The audiobook is 15 hours and 40 minutes long - and it never lags or drags. In fact I would have been happy with more!
And excellent historical read based on fact, populated with engaging characters I cared about and a mystery to boot. I was caught up immediately in the story and loved every bit. Five stars from this listener. Hear for yourself - listen to an excerpt of The Rose Code.
Posted by Luanne at 8:30 AM