Every Vow You Break - Peter Swanson 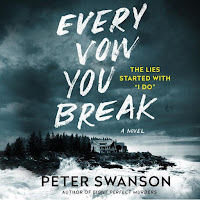 I liked the premise behind Peter Swanson's new book -  Every Vow You Break.
Abigail is happy to be marrying Bruce - she loves him. And it doesn't hurt that he's a millionaire. He'll never find out about her one night stand on her hen night - will he? Well, when the guy shows up on the isolated island Bruce has picked for their honeymoon, there is a distinct possibility that he might...he claims to be in love with Abigail.
Ohh, there's lot of places this plot could go!
For me, Abigail was an unlikeable protagonist, even though I felt like I should be behind her. I found her to be shallow, too in love with the money and marrying someone after having slept with a stranger was trashy. And she's more than a little clueless. (Really - what couple goes for solo hikes the day after getting married?) But, you don't have to love the lead to enjoy the plot. (I should mention that none of the characters were likeable!) It makes things interesting.
Swanson ups the tension with the appearance of the one night stand. Abigail starts to open her eyes and realizes that everything is just 'not right' at the island camp. I'm going to leave it at that without spoiling the plot for you. I was quite engaged with the book until we got to a signpost in an seldom used tunnel - and I knew what was coming next. I was a bit sad that it went in a predictable direction as Swanson has penned some really great twists and turns in previous books. But, he gives us an action filled 'run for the money' in the last bit of the book that kept me quite engaged.
I chose to listen to Every Vow You Break. The narrator was Karissa Vacker and she did a wonderful job of bringing the story to life. Vacker has a rich, slightly gravelly tone to her voice that is pleasant to listen to. And it absolutely suited the mental image I had created for Abigail. She enunciates well and has a good speaking pace. She interprets Swanson' work well and brings emotion to her reading. A great job. Hear for yourself - listen to an audio excerpt of Every Vow You Break.
Swanson is on my list of authors that I read. I enjoyed this latest, but it wasn't the best he's written IMO. But...I can see this one on the big screen.
Posted by Luanne at 9:00 AM