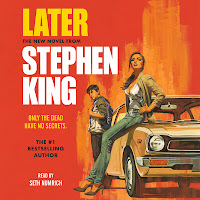 I am a big Stephen King fan and am always eagerly awaiting his newest release. Later is the latest - and is just as good as I knew it would be!
Later is told completely from Jamie Conklin's point of view in a storytelling fashion. He takes us back to his childhood when he discovers that he sees things that no one else does. His single mother warns him to not tell anyone else, but she does let it slip to her girlfriend Liz. What does he see? Dead people. They can see Jamie as well and talk to him before they fade away. And...they cannot lie to him. The adults in his life see the potential in Jamie's gift. His mother's request is made to keep their small family afloat. But Liz.....well, she see other opportunities...
You just know there's going to be something evil amongst the dead Jamie sees and talks to. There is, and it's downright terrifying. Even more so as Jamie is just a child.
Jamie was such a fantastic lead and I loved his voice. He's an adult as he recounts his past and his voice is by turns is self deprecating, wry, frightened and more as he shares his past - and present - with the listener. King does 'young person facing incredible evil on their own' so very, very well. It's impossible to not get caught up in the tension of the plot. There's also some dark humor that I always appreciate.
I loved the cover image and the retro feel. And the title? The word later is used very effectively as foreshadowing by Jamie and is guaranteed to keep you staying up later than you should.
I have actually listened to the last few books and am now hooked on the audio versions of King's work. The narrator was Seth Numrich and he was such a great choice. His tone matched the mental image I had for an adult Jamie, but he also captured the fear, danger and uncertainty of young Jamie. The voice for Mom was spot on. And the thing's voice? Goosebumps, every time it spoke. The voice for Liz suited her actions and personality. Numrich captures the tone and tenor of King's plot so very, very well with his expressive narration. His speaking is clear, easy to understand and the pacing was just right. I've said it before and I'll say it again - I become so much more immersed in a tale when I listen to it. Hear for yourself - listen to an excerpt of Later.
Posted by Luanne at 9:00 AM